Her presidency started with the end of the dictatorial rule in the Philippines. She was the most prominent figure of the 1986 People Power Revolution, ending the 20-year rule of President Marcos. In 1986, Time magazine named her Woman of the Year

Corazon Aquino, popularly known as Tita Cory, served as president of the Philippines. She is the first female president in Asia, establishing several democratic and humanitarian reform programs following the ousting of President Ferdinand Marcos in the Philippines.

Her presidency started with the end of the dictatorial rule in the Philippines. She was the most prominent figure of the 1986 People Power Revolution, ending the 20-year rule of President Marcos. In 1986, Time magazine named her Woman of the Year. Before the revolution, she had not held any elective office. Aquino led the most peaceful revolution in the world to attain democracy. Corazon died in 2009, following a one-year battle with cancer.

Born in January 1993 in the Tarlac Province, she attended school in Manila until the age of 13. She was born in a wealthy political and banking family. Aquino finished her education in the United States, in Philadelphia and New York City. In 1953, she got a BA in French and mathematics from the College of Mount St. Vincent in New York.

She then returned to the Philippines, enrolling in law school in Manila. There, she met Benigno Aquino Jr., an ambitious young journalist. They got married in 1954 and had five children together.

Benigno left his career in journalism for politics. With Corazon at his side, he established himself as one of the brightest young leaders in the country. During his 20-years of service, he was elected mayor, governor, and senator. And during that time, he challenged the rule of the president Marcos.

In 1972, President Ferdinand Marcos declared martial law, stripping citizens of their democratic rights. He also arrested key opposition leaders, including Benigno. Corazon’s husband spent seven years in jail before getting a permission to move to the US with his family in 1980.

During all that time, Corazon stood by her husband’s side and played the role of the supportive wife. After three years in exile, the couple returned to the Philippines in August 1983. But Benigno got killed soon after arriving.

That murder set off a wave of protests against the president and his administration. The opposition coalesced around Corazon Aquino.

In February 1986, under international pressure, Marcos called for presidential elections. The opposition in the Philippines chose Aquino as their candidate. She lost the election narrowly, but they challenged the results.

The defense minister, and the army declared support for Corazon, who led a peaceful revolution and prompted Marcos to seek exile in Hawaii. She got sworn into office on February 25, 1986.

During her six years in office, she fended off coup attempts by former president’s supporters. In 1992, she left office, struggling to address the economic problems of the country.

In 2008, she was diagnosed with colon cancer. After one year of struggling to recover, Aquino died in August 2009.

After leaving the presidency in 1992, she received several awards and citations. She was named as one of 100 Women Who Shaped World History in 1994 in a book by Gail Meyer Rolka. In 1996, she received the J. William Fulbright Prize for International Understanding, joining past recipients like Nelson Mandela and Jimmy Carter.

In 1999, Time Magazine chose her as one of the 20 Most Influential Asians of the 20th century.

As the guiding light of the revolution in the Philippines, she is fondly remembered and revered as Filipinos as the Mother of Philippine democracy. Despite the many accolades, she always stated that the Filipino people, not her, restored democracy in the country.

Aquino was diagnosed with colon cancer in March 2008. Doctors informed her she has three months to live. But she pursued medical treatment and chemotherapy.

A series of healing Masses for Aquino were held throughout the country. In one statement, she said her blood tests indicated she was responding well to treatment. Sadly, she passed away on August 1, 2009.

She left behind a legacy of enriched freedom. The Filipino people came to share the legacy of Aquino with oppressed people around the world. 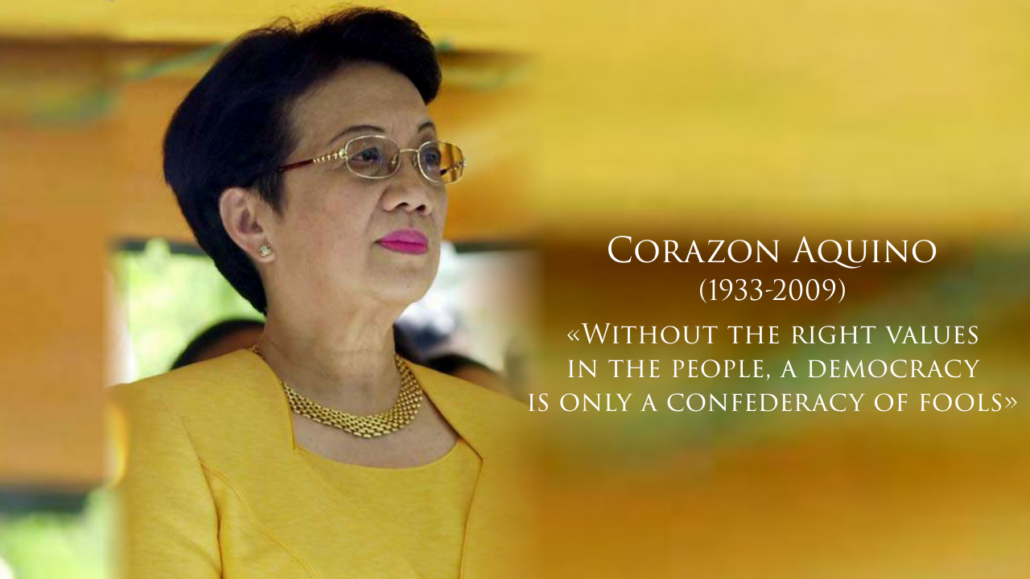 The revolution in the Philippines was the first of the wave of “velvet revolutions”. Similar revolutions liberated countless millions from Manila to Seoul to Johannesburg to Prague.

The People Power revolution remains one of the proudest moments in the history of the country. She managed to motivate ordinary Filipinos to peaks of daring and selflessness at a time their spirit was down due to the 14-year dictatorship.

Corazon went from a housewife to one of the most influential presidents in world’s history. And most importantly, she sparked the momentum for the country to regain a position of respect and dignity. Despite the many awards and accolades, she did not win a Nobel peace prize.

She was nominated for the prize in 1987 by Norwegian member of Parliament Liv Aasen. She said that Corazon chose political dialogue instead of military confrontation, and that is why she deserves the prize for solving a political conflict.

In 1987, Oscar Arias Sanchez won the prize for his work for peace in Central Africa, efforts which led to the accord signed in Guatemala.