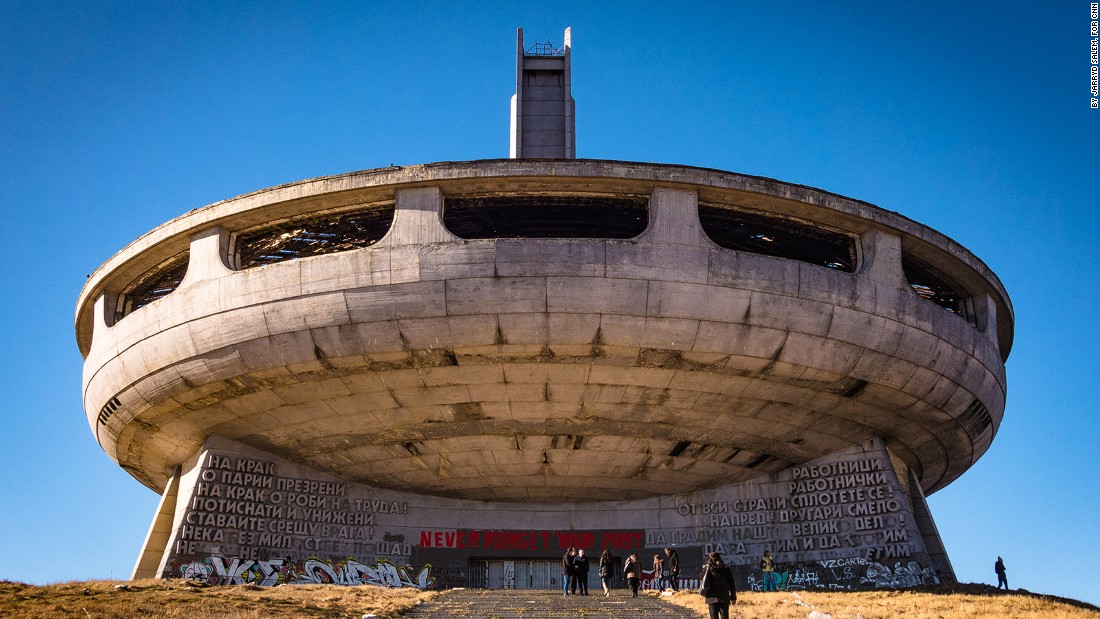 Sitting atop a 1441m peak in the remote mountains of central Bulgaria, Buzludzha monument serves as a memory to a forgotten era. The era of Communism. When you think of the Communism, you mostly think of the Berlin Wall. The destroying of the Wall symbolized the fall of Communism. 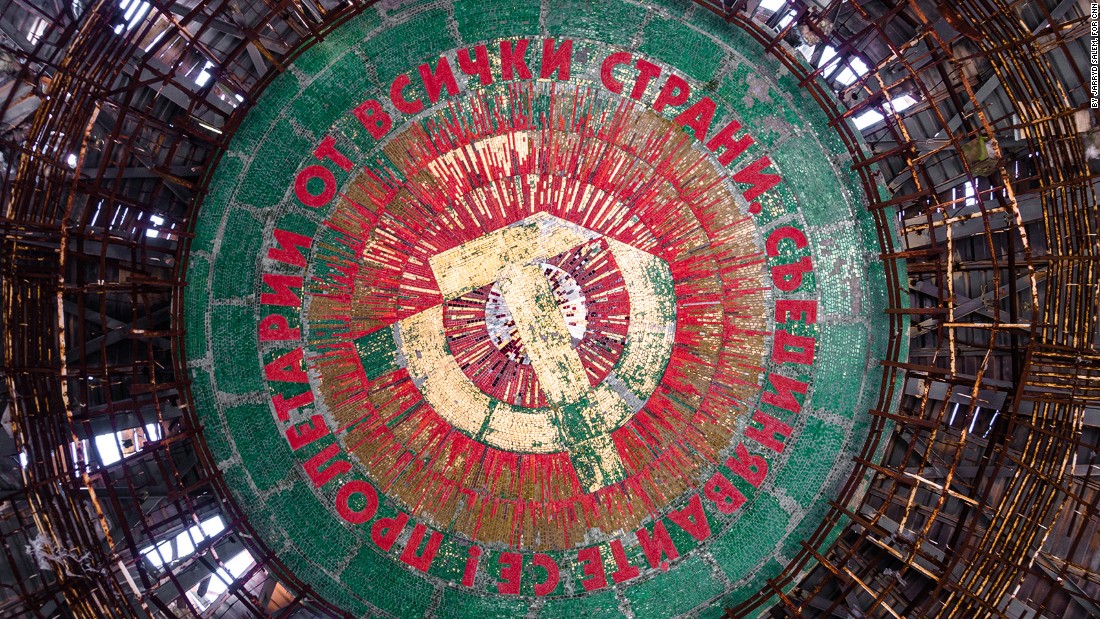 But in Bulgaria, you’ll find another monument that will bring back memories of Communism. Built towards the end of the Cold War, the Bulgarian communist regime built the monument hoping to serve as a prominent and official headquarters for the Party. The site was home for many state functions, and Lenin and Marx posters enriched the interior and exterior. The monument was closed to the public in 1989, after the fall of the communist regime by Todor Zhivkov. However, enthusiastic and sneaky explorers still visit the site to gaze at the otherworldly construction. The monument is popular among independent travelers who can get there by driving from Plovdiv, Veliko Trnovo, Kazanlak, or Shipka.

- The site was already a historical place before the monument was built. The monument sits on a peak that was the location for the final battle between the Ottoman Empire and Bulgarian rebels in 1868. Stefan Karadzha and Hadji Dimiatar were the national heroes participating in that battle

- The monument was abandoned after the fall of the Iron Curtain in 1989, and the current government has no interest in restoration of the building. One simple reason: the government doesn’t have the necessary funds to destroy the structure, or restore to its former glory. The murals have been destroyed, and the roof panels have been stripped by thieves

- The remote mountain peak is a popular site for UFO enthusiasts, as the building looks like it came from a different world. But during the Communist regime, UFO architecture was a popular trend

- Nationwide donators helped fund the monument, in addition to funds secured by the Bulgarian government

The backstory of Buzludzha

When the idea of Buzludzha was first born, the building was meant to serve commemorative function. The first one was to celebrate 1300 years of Bulgarian history (the founding year of the First Bulgarian Empire is 681 AD according to historians). The second commemorative function was to serve as a reminded to the battle between the Ottoman Empire and Bulgarian rebels in 1868 that we mentioned earlier. And the third and last was to commemorate the founding of the socialist movement by Dimitar Blagoev, which was allegedly convened on the mountain top.

In addition to commemorative function, the building also served as a celebration of socialism and communism. 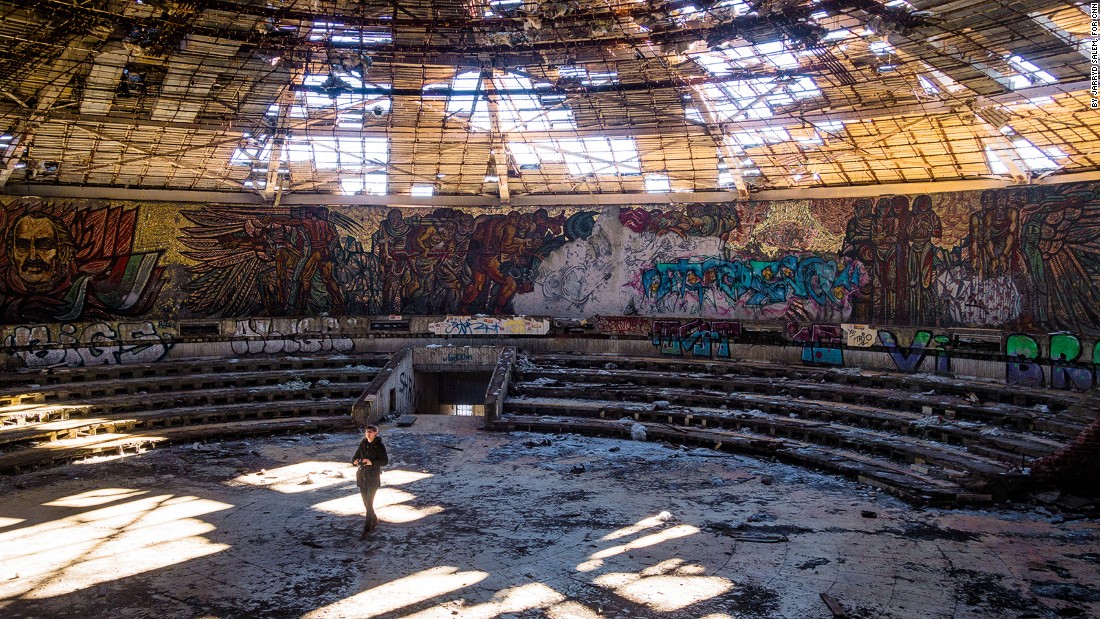 But the then communist leader Zhivkov failed to follow the communism and socialism principles of equality. The size alone of the monument is second to none. The building contains artwork that is cult-of-personality oriented, and ideologically inspired.

Construction began in 1974, while plans for the building were made few years earlier. Georgi Stoilov was the main architect of the project. He was a former mayor of Sofia (the capital of Bulgaria), and co-founder of the Union of Architects in Bulgaria.

The cost of the building process was 14,186,000 leva, which equals to $35 million in today’s rates. The monument was opened on August 23, 1981. Todor Zhivkov announced the opening at the ceremony, saying:

“I am honored to be in the historical position to open the House-Monument, built in honor of the accomplishments of Dimitar Blagoev and his associates; who, 90 years ago, laid the foundations for the revolutionary Marxist Party in Bulgaria. Let the pathways leading here – to the legendary Buzludzha Peak, here in the Stara Planina where the first Marxists came to continue the work of sacred and pure love that was started by Bulgaria’s socialist writers and philosophers – never fall into disrepair. Let generation after generation of socialist and communist Bulgaria come here, to bow down before the feats and the deeds of those who came before; those who lived on this land and gave everything they had to their nation”.

In 2016, Bulgarian people started an initiative, “Buzludzha Project – Memory of Time”, which had one simple goal in mind: restoration of the monument. The people behind the project wanted to preserve the historical heritage of the country. Led by architect Dora Ivanova, the people hoped to get close to 1.5 million euros for restoration and conservation of the project.

What can you see there?

If you ask locals, opinions are split. Some say that the site is “dangerous and not worth the trouble”. Others will say it is “the most unique building you’ll ever see”.

When you look at the building from a distance, it is an impressive to watch. Resembling a UFO stranded on top of the mountain, the site gets more and more unique as you approach it. The closer you get, the better the structure gets. 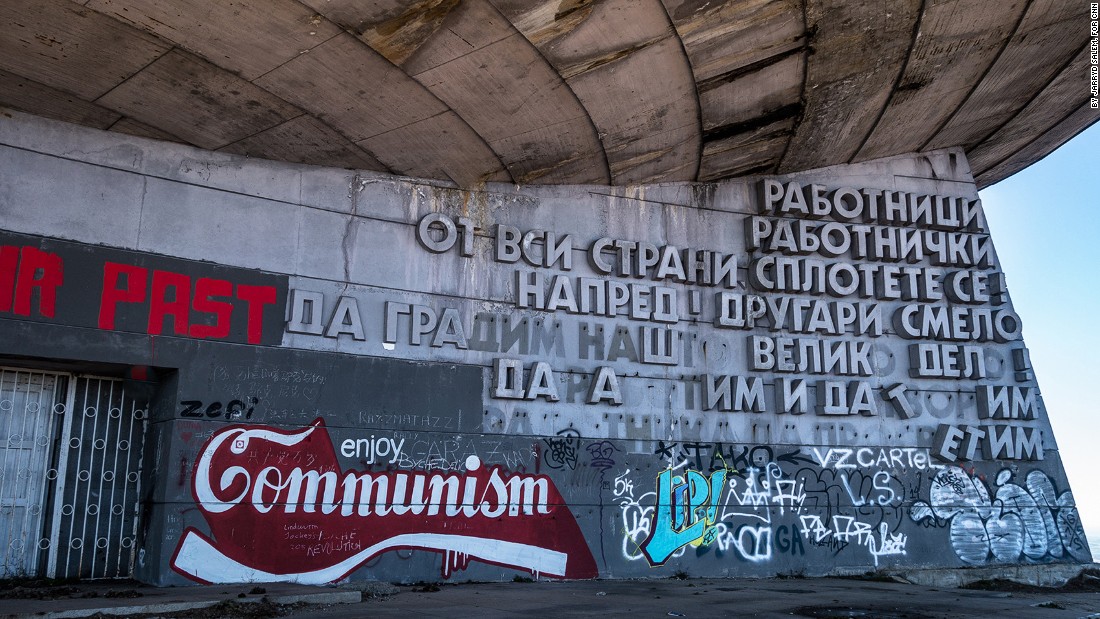 Once you get close to the monument, you get the true “WOW” moment and factor. The dimensions are stunning, and it is probably one of the biggest buildings you will see in real life. The site is loaded with graffiti, from communism-inspired to modern-like.

You can still see the original communist slogans set in stone, although they are slowly crumbling apart. The most prominent line is located at the centre of the monument, and reads “forget your past”.

Some enthusiasts try to enter inside the monument, but that is dangerous and risky. Entering the monument is officially regarded as trespassing.

Social
Top 7 Enlightening Latin phrases we use daily
Latin is a dead language, nobody uses it in modern times. But there was a time when Latin was used to educate the masses
15 Facts about Zeus from Greek Mythology
In Greek mythology, Zeus is sometimes portrayed as the rain god. Homer believed that the Gods live at Olympus, the highe...
America’s First Ladies: Fun Facts you didn’t know
The First Lady needs to be respectable, presentable, smart, intelligent, and so on. So far, America has had some great F...
Civil Rights History: Six women you need to know of
Martin Luther King Jr. might be the first synonym for civil rights, but there were some extraordinary women in the movem...