Belle Gunness – The True Black Widow of the Midwest 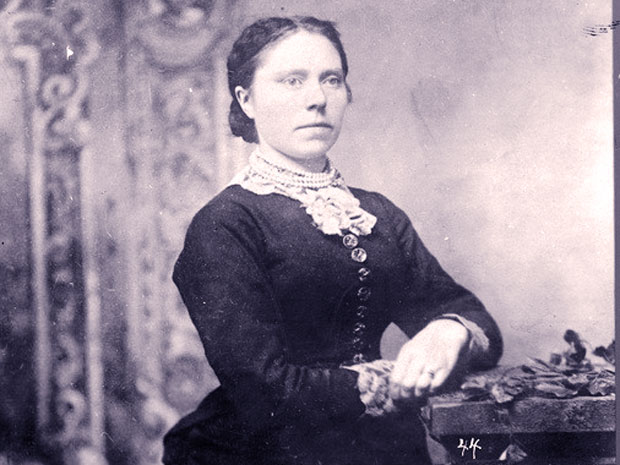 Born as Brynhild Paulsdatter Storeth, she was a Norwegian-American serial killer. She was a big woman, standing six feet tall and weighing more than 200 pounds. According to some reports, she killed between 25 and 40 people between 1884 and 1908 before she disappeared without leaving a single trace. Her body was later recovered.

Belle Mads Ditlev Anton Sorenson, her first victim in Chicago. He was hers love, and they married in 1893. But little did he know that he will become known as the first victim of the Black Widow serial killer. Later, people started calling Belle Lady Bluebeard. But let’s not get ahead of ourselves.

The happy couple had four children together, Myrtle, Lucy, Axel, and Caroline. They opened a confectionery store, but the business was not going good. One year after they started the business, the building caught fire, and the couple collected insurance. Some people believe this is when her idea of killing for money started.

Over the next two years, Caroline and Axel died out of acute colitis. However, some believe that they actually died of poisoning, as the symptoms are very similar. The two children had life insurance, and Belle and her husband got their money. As for Anton Sorenson, he died in 1900, just one day after his two life insurance policies overlapped. Official autopsy revealed his heart gave out. His widow, Belle, was paid $8000, which is more than $200,000 when calculated today. She used the money to purchase a farm in La Porte, Indiana. Part of the property was burned down shortly after, and she collected money from insurance again.

Second victim and suspicious of a murder

And while there was no suspicion of a murder in her first marriage, her second was not as smooth. She met her second husband, Peter Gunness in 1901, just as she was preparing to move from Chicago to Indiana. He was also Norwegian born, and he was also a widower. They married in 1902.

Peter met with a tragic accident in December 1902. According to his widow, Belle, he was reaching for the slippers next to the kitchen stove when he was scalded with brine. The death netted her $300, which is between $60000 and $90000 in today’s world.

But his death was not as smooth. Locals did not believe her story. They did not believe Peter was so clumsy, as he ran a hog farm for years. He was known as an experienced butcher. The district coroner reviewed the case, and declared Peter as murdered. But Belle convinced the investigators and the jury of any wrongdoing.

Her killing frenzy started in 1903, and lasted until 1908. She was not happy without someone to prey upon, so she decided to take matters in her own hands. Belle published a personal ad in some of the big city papers. The ad read:

“Comely widow who owns a large farm in one of the finest districts in La Porte County, Indiana, desires to make the acquaintance of a gentleman equally well provided, with view of joining fortunes. No replies by letter considered unless sender is willing to follow answer with personal visit. Triflers need not apply”.

“WANTED: A woman who owns a beautifully located and valuable farm in first class condition, wants a good and reliable man as partner in the same. Some little cash is required for which will be furnished first-class security.”

She might as well write “come prepared to stay forever”. Men were lining up. Many answered the ad, and they came bearing gifts of cash. Some of the men disappeared shortly after, and never found. And the worst part is, she did not even look like she was doing something. To the people of La Porte, it looked like she had a lot of suitors. She was considered a beautiful woman with her blonde hair, white smile, and tall figure.

Panic started when Jennie, one of her children, disappeared in 1906. Belle claimed that she was sent to a school in Los Angeles, but she was never seen alive ever again. In 1907, a man was seeing buying an expensive wedding ring for Belle. He was never seen again. But the problem was that all her suitors had someone that cared for them, be it children, or family and friends. Everything started going down after Andrew Helgelein’s brother was interested in what happened with his brother. He wrote to  Gunness asking about his brother, and she said she never saw him, even though they were seen together in the city. Andrew even withdrew all of his funds from his personal bank account to satisfy her greed for money.

Inside the rapid hole

In 1908, Belle acknowledged she cannot do this forever. So, she wrote her last will and testament, claiming that she feared for her life because Ray Lamphere, a man she got with, was jealous of her suitors and was deeply in love with her. The same night, her house was burned down.

Four bodies were found inside the house, three of which were identified as her children. The last one was the decapitated body of a woman, with people presuming it was Belle. Ray was arrested for murder and arson. The problem was that the body of the woman couldn’t not be identified.

And that is when the journey through the rapid hole started. Investigators looked through the house, and they found items like watches. Andrew Helgelein’s brother was at the site as well. It was him who started digging and found his brother. The police found many other bodies, including the one of Jennie’s. Twelve bodies were found near the hog pen, but there were many other body parts.

Lamphere was found guilty of arson, and he admitted that he helped Belle bury the bodies. But he was deemed innocent of a murder. He said Gunness killed 42 people. He also explained her strategy, as she was giving them meal and then put drugs in their coffee. Afterwards, she would smash their head with a meat chopper, or simply poison them. She then dissected and chopped the bodies into pieces, and bury in the yard or fed the remains to her hogs.

Belle’s body was found in May the same year, convincing everyone she died in the fire. But the skull was never recovered, which fueled the conspiracies that she might be living off the fortune somewhere else.

Many books, movies, and shows were filmed on the story of Belle Gunness. Here are some.

- Method, a movie published in 2004 inspired and based on her character

- The Belle Gunness – a serial killer from Selbu documentary in 2005

- The Devil Knows my Name, an album by John 5, featuring the track Black Widow of La Porte

- Belle the Butcher, a song featured on the album Grim Scary Tales on Macabre’s album