The new Sukhoi Su-57 has arrived. In this video, filmed during the Maks 2019 fair, a first-class test pilot performs an amazing flight, showing all of the features and possibilities of the modern Russian fighter aircraft.

The Su-57 is a single-seat and twin-engine, stealth fighter aircraft with multirole capability. It was designed for air superiority and attack operations.

Intended to succeed the MiG-29 and Su-27 in the Russian Air Force, the Su-57 is the basis of the Fifth Generation Fighter Aircraft.

The first prototype of the aircraft made his maiden flight on January 29, with deliveries to the Russian army arriving in late 2018.

49:53
Aviation
Flights And Fights - Inside The Low Cost Airline

When Ryanair’s Micheal O’Leary and EasyJet’s Sir Stelios started their companies, they opened up a whole new frontier in the aviation industry.They started the low cost ...

46:08
Aviation +1
Why Are Airports So Busy? | Heathrow: Britain's Busiest Airport

If you have ever been to a big airport, you’ve noticed the abundance of people there. Some airports are just busier than others, and there are many factors behind that. For...

We hear it all the time. Flying is safer than driving a car. For some people, it is hard to believe, considering planes defy gravity by spending hours at 30,000 feet in the a... 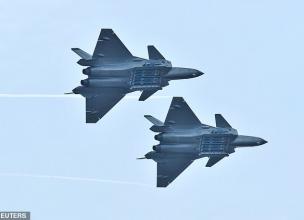 Military/War
First Live Look at China’ J20, Aircraft Superior to F-22 and F-35
There have been reports in the past few years that the jet had been built in part from plans of US war planes. To be spe...
Amelia Earhart – the woman that changed aviation forever
On May 20, 1932, Earhart broke down barriers as the first female to solo pilot a plane across the Atlantic
Month of Women – Valentina Tereshkova
In June 1963, Valentina orbited Earth 48 times, spent almost three days in space in Volstok 6, and she exchanged communi...