There are 25 minorities in Yunnan, 25 of which have more than 5,000 members. Among them, 16 are indigenous. The biggest population is the Yi, and the smallest is Dulong

Yunnan is a province in China located in the Southwest part of the country. Spanning approximately 394,000 square kilometers, Yunnan has a population of 47.368 million people as of 2015. And it is one of the most diverse countries in the world. In terms of ethnic diversity, Yunnan is the home to 26 different Chinese minorities. It is home to some of the rare and tiny minorities like Pumi, to the large populations like Yi and Dai.

There are 25 minorities in Yunnan, 25 of which have more than 5,000 members. Among them, 16 are indigenous. The biggest population is the Yi, and the smallest is Dulong. Some live in individual communities, others live in small areas, and it all contributes to the colorful and distinctive look of the province.

Thanks to the ethnic diversity, there is also a language diversity in Yunnan. Most of the dialects spoken in Yunnan belong to the southwestern subdivision of the Mandarin group. Notable features include the partial or complete loss of distinction between finals /n/ and /ŋ/, as well as the lack of /y/. Most people also speak Standard Chinese, which is used by the government, in the media, and in education.

Languages spoken in Yunnan include Tibeto-Burman languages, and Hmong-Mien languages.

The Bai people are native to Dali, who was once the seat of the Nanzhao and Dali Kingdoms. The kingdoms spanned a period of more than 800 years in the Tang Dynasty. Destroyed by the Mongol invaders, the people of the Kingdom then joined China. Most of them are Mahayana Buddhists, but they also have a native religion which combines shamanism and ancestor worship. 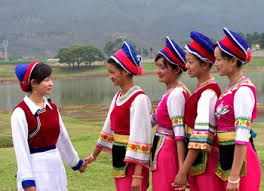 Their most popular tradition is the san dao cha, or three course tea ceremony. The courses consist of a butter tea, sweet tea, and a third one that is both bitter and sweet, but also spicy. Hosts present this ceremony to honored guests and for special occasions.

Dai people live in the southern part of the Yunnan province, and they are close relatives to the Thai people. The native language, religion, and architecture of the Dai and Thai are very similar. Dai people come from Xishuangbanna, a place where Chinese tourists went to have a taste of Thailand without leaving their country.

Their most famous festival is the po shui jie, or Water Splashing festival. Happening annually in April, tourists and locals take to the streets and splash, spray, and pour water over anyone they encounter. Generally speaking, it is a way to let loose.

The Wa people live in the far western reaches of the province, just along the border of Burma. They have a fearsome reputation, due to their old headhunting ways, which is no longer practiced. Dancing and drinking are two important things to the Wa people, and they often do them in combination.

Wa people sometimes give their music a tribal and African feel. Their traditional clothing features black and red prominently. You can say they appear as more Burmese and Indian, and they are very different than the Han Chinese people.

One of the biggest minority in Yunnan, there are more than 8 million Yi people. They construct their homes in the far flung mountainous region. They are very different in terms that they have strict social structure. The Black Yi are nobles, and White Yi are commoners feudally tied to the Black Yi. Non Yi people are usually slaves. 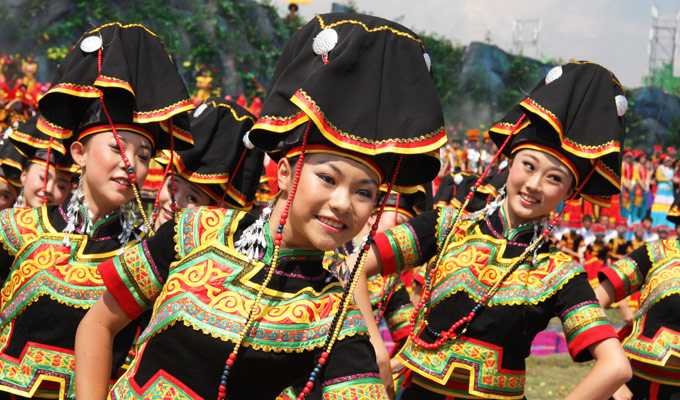 Their native religion is shamanism, and it is still practiced today. They are also known for their musical traditions, which comes to life during the Torch Festival. Giant flaming torches are lit to commemorate a legendary figure.

Known also as the Hmong, this tribe group lives in China, but also in Laos Vietnam, and Thailand. Many of them migrated to the United States as well, after the Vietnam War.

Known for their embroidered textiles and beautiful silver craftsmanship. The majority of bride’s wedding trousseau is made of silver, and the family’s wealth is often in silver.

Naxi people are a mysterious ethnic group known for their Dongba religion. They also have their own distinct pictographic writing system. Influenced by different religions of their neighbors, the Naxi people developed their own religion over time.

Social
Stockholm Syndrome – How to Identify and Help?
The term originally made it to the public’s eye in 1973 when four hostages were taken during a bank robbery in Stockho...
Chernobyl Facts to Learn After Watching HBO’s Popular Show
At the time of the disaster, the Soviet Union did not want to alert the Western World, and waited 36 hours for evacuatio...
How Facebook Became the Social Media Powerhouse
Facebook was launched in 2004, at a time when MySpace was still the King of the social media. Younger people also used H...
How Does a World Ruled by Women Look Like? the Mosuo Tribe Has the Answer
Mosuo tribe families consist of 10 or more members, but all of the real estate and property is in the hands of the woman...