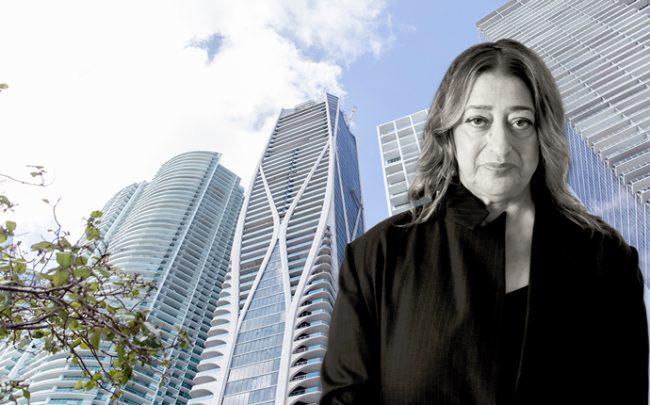 She refused to say that her designs belong in a particular style or period. Zaha was known as “the queen of curves”. But her buildings are not easily grouped with one particular style

The recently opened Daxing Airport in Beijing was praised for its spectacular form. And it was co-designed by Zaha Hadid, a legendary architect and designed. She passed away in 2016, so she couldn’t finish the project by herself. However, the studio she formed Zaha Hadid Architects finished up the project.

She was an Iraqi-British architect, and the first woman to receive the prestigious Pritzker Architecture Prize in 2004. She also received Stirling Prize, the most prestigious architectural award in the UK in 2010 and 2011.

What is Zaha Hadid style?

She refused to say that her designs belong in a particular style or period. Zaha was known as “the queen of curves”. But her buildings are not easily grouped with one particular style.

Instead, she preferred not to limit herself and her practice to a specific moment. What is she known for is the use of geometric shapes to create dynamic and fluid structure.

Most of her inspiration comes from her love of abstract painting and drawing. Her idea is the lightness, the floating, and the structure and how it lands gently on the ground together. She worked mostly with concrete and glass, taking the industrial materials to new heights. She managed to bend industrial materials and subtly change them into more natural shapes.

With that in mind, here are a couple of buildings that are just as fantastic as the Daxing airport.

This is the first project she completed. It is located in the small German town and commune, Weil am Rhein.

The complex construction of tilted and clashing planes looks different from her later and more organic designs. In her own words, the building is a clear demonstration of the rhetorical power of architecture.

This building was her first opportunity to bring her abstract drawings and paintings to life in a physical form. And she did not disappoint. The sharp and angular concrete planes are just a glimpse of the future of her architecture. 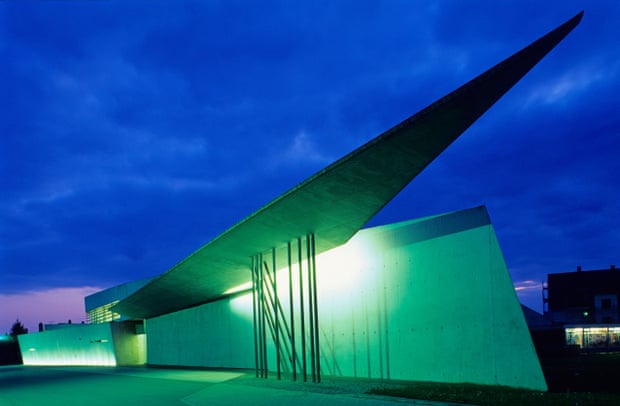 This building was inspired by gladioli and the waterway beneath it. It was the first bridge she completed. As we will see later on, she had other bridges as well. The bridge is 280m long, and is made of fiber-glass reinforced concrete, spanning across the river Ebro. The bridge was built to link the 2008 Zaragoza Expo with the neighborhood close to it. It is made of half pedestrian walkway, and half exhibition area. No cars can on the bridge. It is just a great way to cross a river on foot. 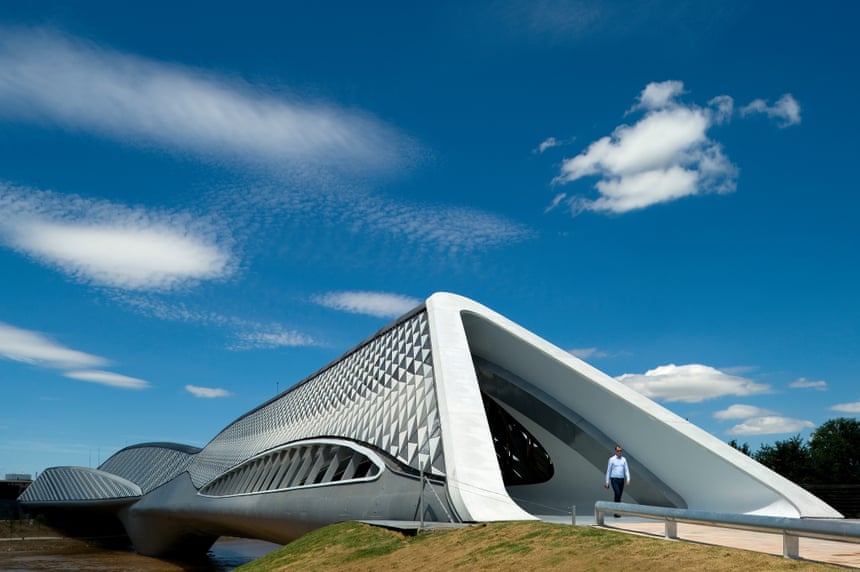 She actually worked on this bridge in the same time she worked on the Zaragoza bridge. But it is a different type of bridge. This two-way four lane highway bridge gives you a stunning look at her curving forms and how they translate to functional architecture.

The bridge connects Abu Dhabi island to the southern Gulf shore. It was inspired by the form of sand dunes, showing her inspiration from the nature. It stretches half a mile, or 842m, and it is one of the most complex bridges ever constructed.

Clad in reinforced concreted and polyester, this 619,000 square foot center is located in Baku, Azerbaijan. It is mostly known for the swooping façade.

It is also noted for its distinctive architecture and flowing style with sharp angles. All swooping cuves and flowing space, this complex won the London Design Museum award in 2014.

One of the judges called this cultural center “as pure and sexy as Marilyn Monroe’s blown skirt”. Inside, there is a museum, auditorium, and a multi-purpose hall. 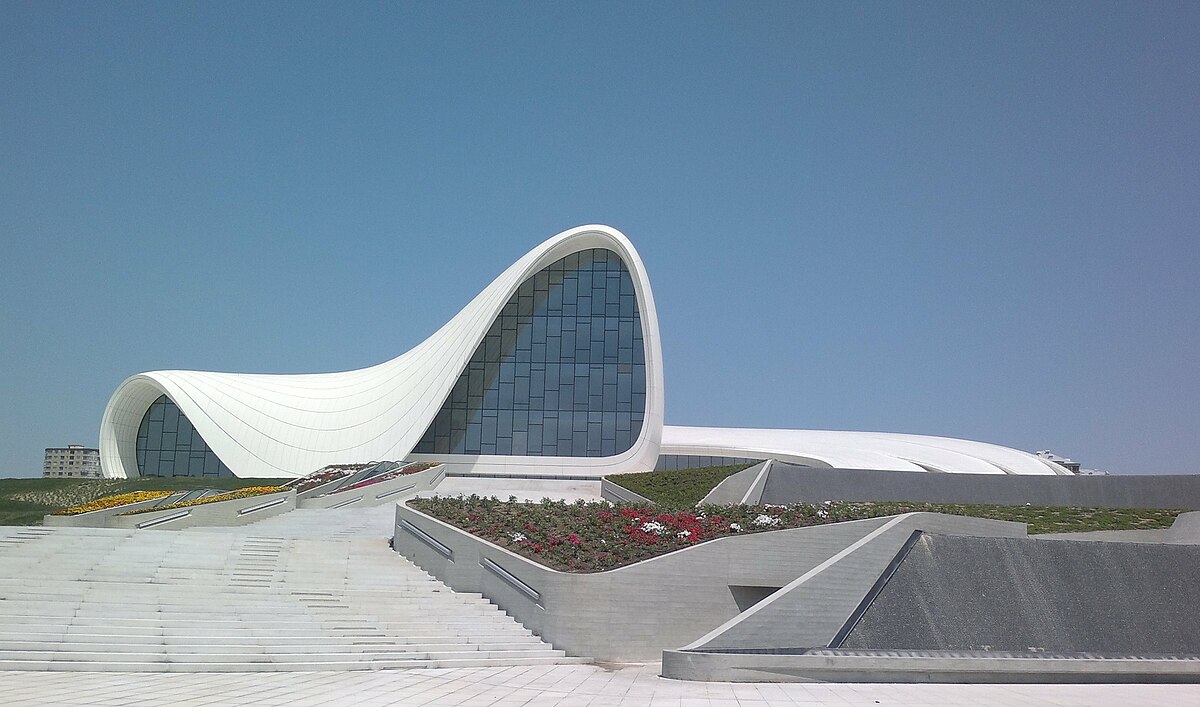 This building is called “Glasgow’s Guggenheim”. It won the 2013 European museum of the year award. The Riverside museum was the first major building in Britain Hadid designed.

The striking figure with its zigzagging zinc-clad roof is definitely stunning. It was built on the site of an old shipyard.

However, despite its beauty, many critics complain about the display strategy, which is placing exhibits high up on the wall, which is too far from view.

Hadid was tasked to create one of the major centers for the 2012 Olympics in London. She designed the Aquatics center, taking inspiration from water in motion, or waves. That is why the roof rises up like a wave.

She describes this building like “pebbles in a stream smoothed by erosion”. The building was designed to blend in perfectly with the riverside setting. It is widely regarded as the most alluring opera houses ever build. It has a folded and flowing glass structure that lets abundance of light.

The building was inaugurated with the first ever performance in China of Puccini’s Tudandot.

This building is a dual commercial and office center. It was created from a cluster of four oval buildings topped by glass. With an egg-shape form, they are connected by curving pathways, giving you a sense and optical illusion of continuous movement.

The circle functions as the symbol of unity and perfection in China.

This is one of the few projects where Hadid uses cubic shapes. While she was known as the Queen of curves, even Zaha changed her style every now and then. The Rosenthal Contemporary Arts Centre in Cincinnati is the first US museum designed by a woman. 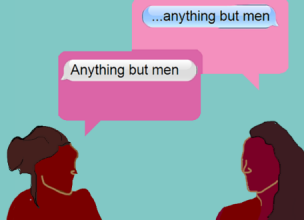