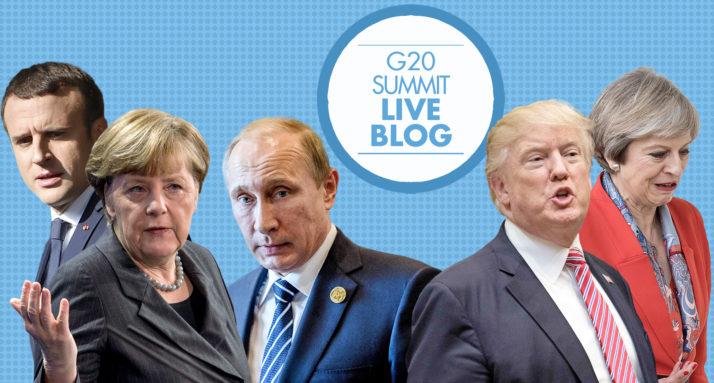 The G20 is an acronym that stands for a group of 20. The G20 is a group of 19 countries plus the European Union, trying to work the world economy. The G20 was founded in 1999, with aim to discuss policy pertaining to the promotion of international financial stability

The G20 is an acronym that stands for a group of 20. The G20 is a group of 19 countries plus the European Union, trying to work the world economy. The G20 was founded in 1999, with aim to discuss policy pertaining to the promotion of international financial stability.

The group focuses on issues that go beyond the responsibilities of one organization. The members of the G20 represent two thirds of the world’s population and 85% of the world’s economy. Since 2007, the media has covered each G20 summit.

The primary mandate of the group is to prevent future international financial crises, and shape the global economic agenda.

Countries are represented by the finance minister and central bank governor. The G20 summit is held at the same time as the International Monetary Fund and the World Bank.

What started as an informal get-together of finance ministers, is now the largest and most influential economic forum.

Members of the G20

As mentioned previously, the G20 is made up of 19 member states plus the European Union. There are always guest members and selected few countries that are invited to the event.

One of the main questions is why is not every country invited. The answer is “fearing deadlock in a larger decision-making body”.

It is also important to note that there are no formal votes or resolutions on the basis of fixed voting shares or economic criteria. Instead, at the end of the summit, the lines of informal influence in the organization trace those of major power politics.

The G20 has no permanent staff of its own. The chairmanship rotates annually between nations divided into regional groupings.

The full list of member states is the following: Argentina, Australia, Brazil, Canada, France, Germany, India, Indonesia, Italy, Japan, Mexico, Russia, Saudi Arabia, South Korea, Turkey, United Kingdom, United States of America, China, South Africa, and the European Union, represented by the European Commission. Spain is a permanent non-member invitee to the summits. Other countries attend the summit due to invitation of the host country. In the past few years, it has become customary for the Chair of the ASEAN (Association of Southeast Asian Nations) to attend, as well as representatives of the African Union and NEPAD.

Most people have troubles differentiating the G8 and the G20 summit. There are two main differences. One, of course is the number of countries and their profile. The second is the focus of the summit.

The group of eight, or G8, was established as G7 in 1976 but was renamed after the admission of Russia in 1998. It was formed as an international forum for the eight major industrial economies, compromising of America, Canada, France, Germany, Japan, Russia, Italy, and the United Kingdom. The G8 seeks cooperation on economic issues facing the major industrial economies. The G20, on the other hand, reflects the wider interests of both developed and emerging economies.

The G20 was formed as a reaction to the growth of Brazil, China, India, and Russia (the BRIC countries). This growth has driven the growth of the global economy. The G7 countries grow slower.

As such, the BRIC countries are critical for ensuring continued global economic prosperity. The importance of the BRIC countries is critical. While the G7 countries could meet and decide on global economic issues without BRIC and G20 countries, the G20 holds significant influence. For example, China produces much of the manufacturing for the United States, India is among the biggest providers in high-tech services, and Russia delivers most of the natural gas to Europe.

How often do they meet?

The G20 meeting occurs on an annual basis. However, when there is an important issue, the leaders can meet twice a year. Such was the case in 2009 and 2010, when the global economy was in crisis.

The first meeting occurred in Berlin, December 1999. It was hosted by the German and Canadian finance ministers.

Since then, there have been more than 10 summits between heads of state or government of G20 economies and 19 G20 meetings between finance ministers and central bank governors.