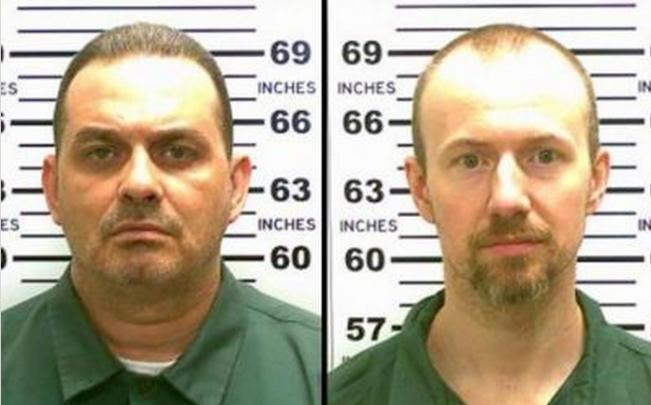 48-year-old Richard Matt and 34-year-old David Sweat have managed to escape their prison cell in the Clinton Correctional Facility in Dannemora, New York, using power tools to cut their way out.

Hooded clothing was arranged in their bunks to deter the guards. After the discovery, officers immediately began a search for the two convicted murderers and have voiced their concerns over the two being extremely dangerous.

A note left for the guards with a disturbing smiley face and the words "Have a nice day!" was found at the scene along with a gaping hole in their cell wall under the bunks, made by electric power tools it is claimed. How the inmates were in possession of these tools is yet unconfirmed.

They escaped through a maze of tunnels and pipes, using the power tools to cut through thick steel and exiting through a manhole cover in a street nearby the prison. Like a scene straight out of a movie, police are now frantically searching for the two dangerous men, setting up road blocks around Dannemora in an attempt to retrieve them. Matt was serving a sentence of 25 years to life, for beating to death a man in 1997 and Sweat was serving a life sentence without parole for the murder of a Sherriff’s deputy in 2002.

Justice
Unheard Heroes: Susana Trimarco
For her work in human trafficking, Susana has earned a number of awards. The biggest one came in 2013, when she was nomi...
The Curious Case of Lawrence McKinney – Can the Justice System make Mistake?
Faith is what got him through 31 years, 9 months, 18 days, and 12 hours of prison. He was wrongfully sentenced, and was ...
Top 7 Cruelest Rape Punishments
More than 10 countries around the world punish rape by death
How the Gulf Cartel, Juárez Cartel and the Sinaloa Cartel control the drug trafficking routes
Despite being in war, the three cartels have often allied to fight the greater good. At the moment, there are two factio...