Mind Blowing Facts about Space to Get you Thinking

Just think about it, one million Earths could fit inside the sun, and the Sun is considered to be an average-size star.

We have always been impressed with the space. The space, the Final Frontier, as the Star Trek crew calls it. Humans have been on a mission to explore space, and it will continue to be like that for the foreseeable future.

One of the reasons why we are impressed and bewitched with space, it is because we cannot fully grasp the big picture. Just think about it, one million Earths could fit inside the sun, and the Sun is considered to be an average-size star. There is no telling how many stars are there in space, so just imagine how many planets can there be. That trip from USA to Europe does look short when you put it in perspective. With that in mind, here are more mind-blowing facts about space.

All of space is completely silent. That is because sound waves need a medium to travel through. And since there is no atmosphere in space, there is no medium to help waves travel. Therefore, space will always be eerily silent.

The good news is that radio waves can travel through space. That is how astronauts can talk to each other in space.

An infinite number of stars

We have no idea how many stars there are in the universe. Right now, scientists use an estimate number, and that is just for our own galaxy, the Milky Way. Multiply that by the number of galaxies in the universe, and you get to a number that is hard to grasp. You cannot even write it on a piece of paper. NASA can confidently say there are zillions of uncountable stars. And a zillion is any uncountable amount.

At one point, an Australian National University study put the estimate at 70 sextillion. That is 70,000 million million million. And that is just a guess.

The footprints that Apollo astronauts made on the moon will stay there for at least 100 million years. That is because the moon doesn’t have an atmosphere. No water to wash away, no wind to erode, and the marks look permanent. All the footprints, roverprints, spaceship prints, and similar marks will stay preserved on the moon for the years to come.

That is not forever, however. Since the moon has a dynamic environment, it is constantly bombarded with micrometeorites. Erosion is still happening on the moon, but the process is way too slow.

Where are those solar panels?

If you want to feel sorry why you do not have a solar panel, this fact will just make you run to the store. More energy from the Sun hits Earth every hour, than the planet uses in a year. Think about the potential.

Sadly, at the moment, solar technology produces less than one tenth of 1% of global energy demand. There are factors that prevent us from maximizing solar energy, like how much land is required for solar panels. There is also the weather factor, as solar panels are not reliable in bad weather and at night. But most importantly, at the moment, solar technology is too expensive for the average customer.

Speaking of weather, extreme weather is common on some planets. If you thought weather catastrophes like tsunami are bad, think about what happens on other planets. For example, Jupiter has fast winds and the Great Red spot a massive hurricane style storm that has raged for the last 300 years without a pause. Mercury and Mars can have extreme temperature changes from zero to boiling hot in the same day. And Neptune has the fastest ever wind speeds reaching 1600mph.

Distance is not as important

The hottest planet is not the one that is closest to the Sun. You might think it is Mercury, since that is the closest planet. But that is not the case. Mercury does not have any atmosphere, meaning that the planet is hot only during daytime when it is directly facing the sun. The temperature can rise up to 425 C at this point, but also drop to 180 C during the night.

Venus, on the other hand, is sizzling 500 C all of the time. That is because the thick clouds trap the Sun’s heat.

Nebula means cloud in Latin. These are areas in which stars are either being created, or they have died. The cosmic clouds can come in all shapes and sizes. Made out of interstellar dust and gases, they form shapes like a Christmas tree, a unicorn, a fried egg, a hand, and much more. They are not visible to the naked eye, but there is a lot more happening at night than you can see. 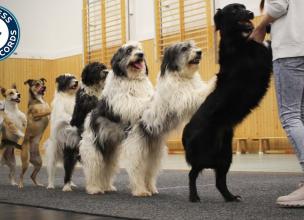 Strange
Top 10 Times Dogs Made it to the Guinness Book of World Records
We can safely say all dogs are amazing. Yet, some pups go above and beyond and excel at what they do. You might not know...
The MOSE Project in Venice – How to Stop Flooding
The MOSE project in Venice will be fully operational in 2023. At the time, the barriers will be raised when the water le...
FAST – Largest Single Aperture Telescope in the World
Apart from the obligatory extraterrestrial life hunting, the telescope will also become handy in a number of different w...
Demolition Town New Zealand – Trip to a Surreal Town
It is an entire ghost town made from recycled materials and mannequins. They are strategically placed to freak people out