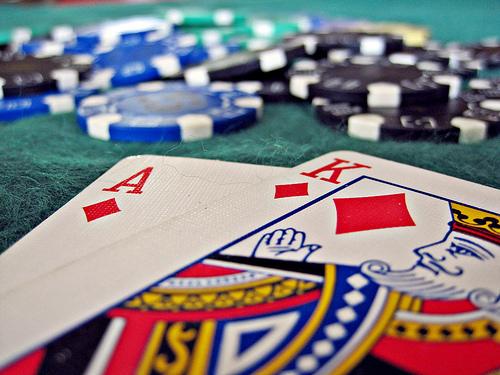 This solidly crafted and comprehensively researched piece shows that when it comes to the serious players, practical mathematics holds sway

BBC Horizon’s exploration of the 40-year battle between casino owners and mathematicians keen to cash in on their ability to calculate a winning margin makes for a revealing and compelling narrative. Anyone who thought that the game of blackjack was simply a matter of luck is advised to think again. This solidly crafted and comprehensively researched piece shows that when it comes to the serious players, practical mathematics holds sway. And in a similarly counterintuitive twist it also manages to combine a genuine sense of drama with all the calculation that is involved.

The depiction of the minor revolution in casino gambling that took place between the 1960s and the 1990s has all the makings of a feature film. Boasting first-hand testimony from those directly involved, Making Millions the Easy Way offers a dramatic insight to the battle of wits and technology that has run cheek by jowl alongside the business of casino gambling for over half a century.

The tale of DIY computer technology and subterfuge is a million miles away from the super-slick online evolution of modern-day casino games. Blackjack online at reputable and wholly automated sites may have its roots in this remarkable tale, but the story of 20th century blackjack’s technological arms race is worth delving in to.

The documentary starts with the high rollers who enjoyed every gambler’s dream winning sequence as they took hundreds of thousands of dollars from casinos around the world. In truth, however, the real story starts with the insight of a mathematician and entirely initially casual gambler, Professor Edward Thorp. Thorp’s insight derived from the simple observation that the odds affecting a game of blackjack are dynamic.

Whereas in games like roulette the odds of a particular number are unaffected by anything that has gone before, the fact that blackjack cards once used are discarded rather than returned to the dealer for the next hand means that the odds are continually changing. Thorp’s insight was to recognise this and to then develop a system that would allow a player to keep track of all cards played and thus be in a position to calculate the odds of the next hand more accurately. The technique quickly became famous as ‘card counting’.

Thorp’s book, Beat the Dealer - A Winning Strategy for the Game of Twenty One was the culmination of a serious academic interrogation of the shifting odds that subsequent hands generate. In simple terms, Thorp showed that if a player can remember which cards have already been played, he or she has information that can help them predict the likelihood of subsequent hands. For example, if you have seen four aces played, the likelihood of there being any more is - in a single deck game at least - reduced to zero. That logic applies relatively to every card and every permutation of cards. Armed with that progressively updating data, players are in a position to bet according to an informed appreciation of the actual chances of winning - as opposed to trusting to their instincts.

Cue the remarkable tale of Keith Taft, another mathematical enthusiast who, inspired by Thorp, developed a string of machines capable of delivering the computational power Thorp’s card counting called for.

The story spins through the engineering and the subterfuge involved as casino bosses - hardly surprisingly - sought to clamp down on having the odds turned against them.

The story of the various teams involved in ever more complex attempts to perfect a card-counting methods that were undetectable to casino bosses, and the equally strident efforts of those owners to counter the counters makes for a rare insight into what for many remains a hidden world.

A sound bet for a good watch

If Horizon’s up-close-and-personal depiction of the story of card counting adds a touch of Robin Hood rebellion to the business of casino blackjack, the good news is that 21st century online providers play straight. The sense of the Wild West that the film delivers is arguably a better fit for a drama than a documentary - Rain Man comes to mind - but if the worst thing that can be said about a documentary is that its subject matter is too unbelievably dramatic, then it is probably a safe bet that it won’t disappoint. Making Millions the Easy Way may not make its viewers rich, but it is a safe bet that it will, in the best BBC tradition, inform and entertain in equal measure.