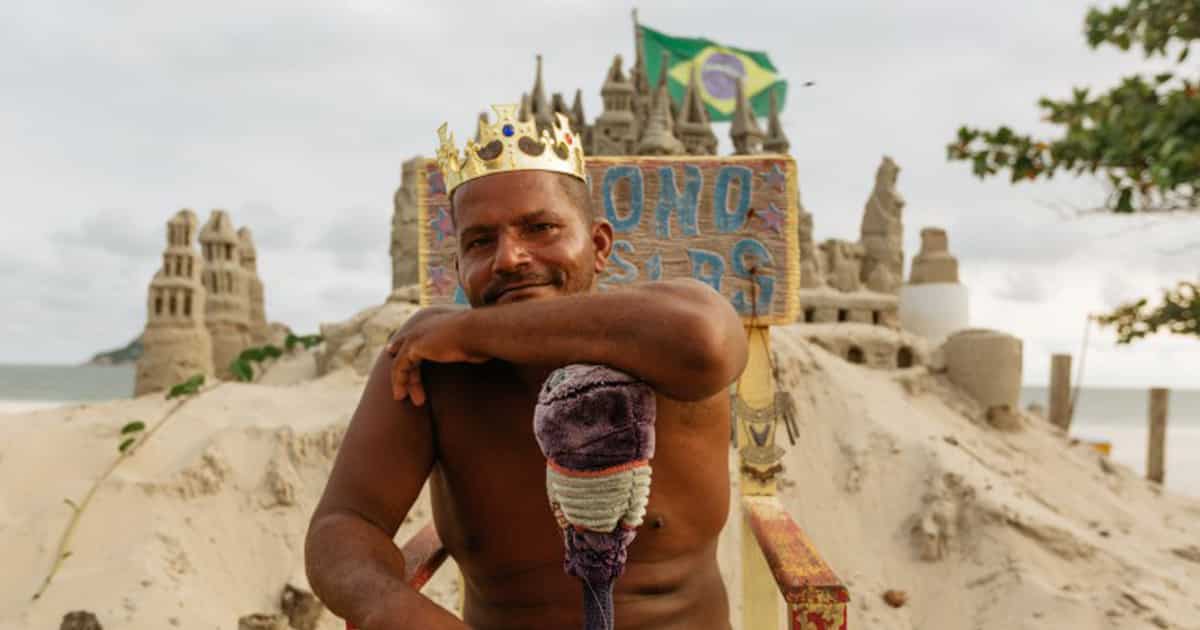 Marcio Mizael Matolias lives on the most popular beach in Rio de Janeiro, and pays no rent because his home is a sand castle

In 2016, the Wamdue project made a remake of the popular King of My Castle song. The lyrics are “Must be the reason why I’m king of my castle”. Well, for Marcio Mizael Matolias, living in his own castle is a reality. And he has no noble history of any ancestors that were kings. Simply put, he decided he wanted to be a king, and he made his wish possible.

For more than 20 years, King Marcio from Brazil avoids paying rent, bills, or anything similar, all while living in one of the most prestigious neighborhoods in Rio de Janeiro. How? Well, he built a sand castle near Barra de Tijuca.

Who is King Marcio?

Marcio is 45 years old, and he is known by locals as “King Marcio”. He lives in his castle on the beach of Barra da Tijuca. His castle features a royal throne for himself just outside the castle. At all times, he is seen wearing a plastic crown and carrying a makeshift staff. 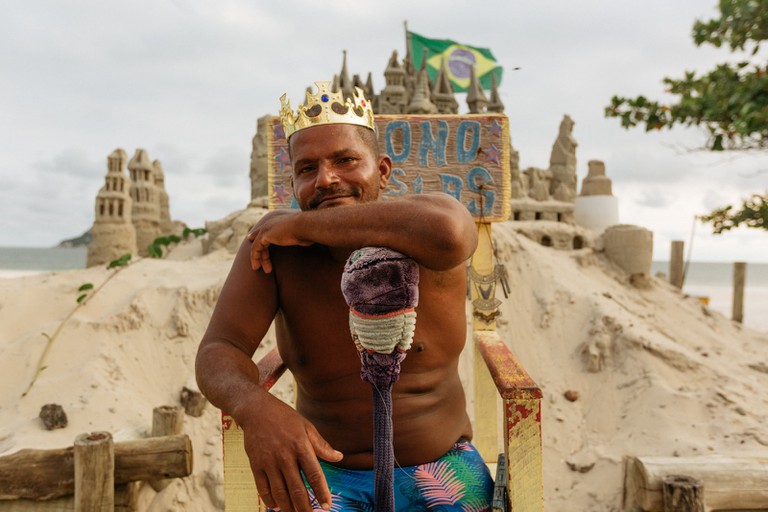 He enjoys his way of living, as he has always lived on the beach. He grew up in the Bay of Guanabara, spending most, if not all of his life on the beach. He says “People pay exorbitant rents to live in front of the sea, I do not have bills and here I have a good life”. If that sounds like a dream come true scenario, it almost is.

Sandcastles and statues are a common sight along the main beaches in Rio. They have become tourist attractions, as people visiting the city love to take photos of them. But Marcio is the first one to take the sandcastles to the next level.

Some might say it is just the reality of high housing costs for many people living in Rio. Not many people can afford a nice apartment. But Mario just wants to live by the beach. 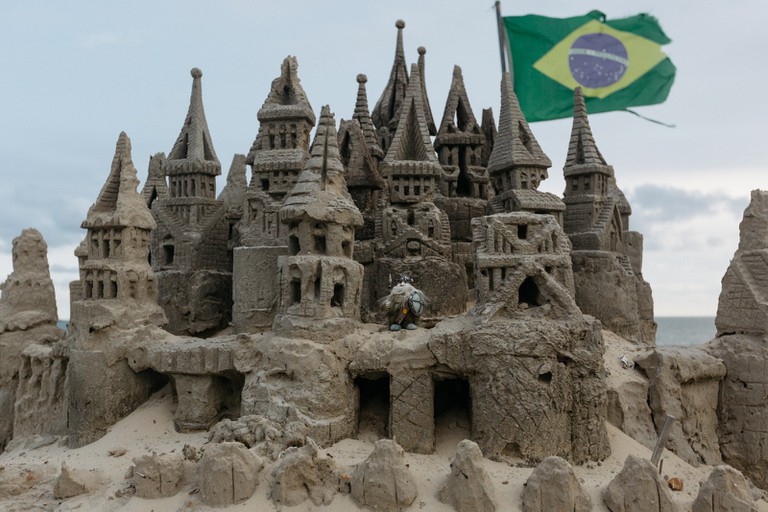 How the castle was born 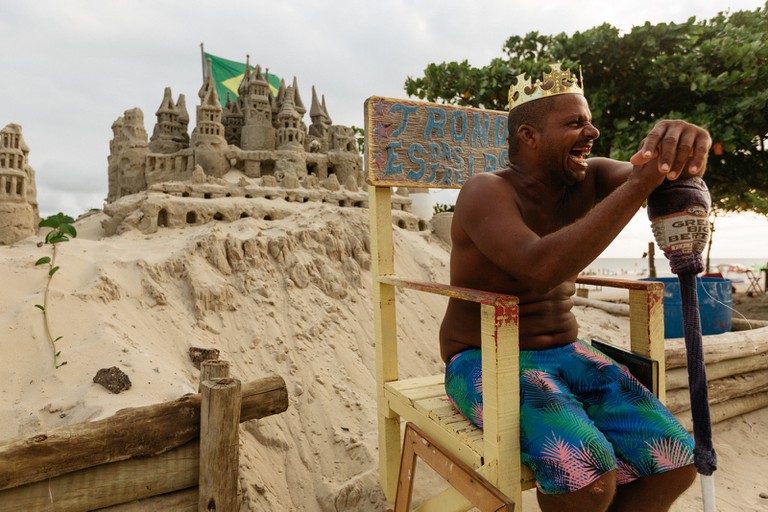 He regularly water the sides of his castle to prevent fine sand from crumbling. He maintains the castle’s walls and turrets in one of the hottest cities in the world.

A single tropical storm can destroy the entire castle in a matter of minutes, and he has to rebuild it afterward. But because he has lived in the castle for 22 years, he has mastered the art of rebuilding and reconstructing his sandcastle.

On the outside, the castle might seem big and grandiose. But on the inside, it is just a tiny room. He has a three-square meter bedroom, piled with books from floor to ceiling, and supported by wooden beams. His bathroom is nearby a lifeguard shack where he is able to take a shower.

The downside of living in a sand castle

The only downside of his castle is that the sand holds in heat. Take into account that summer temperatures in Rio can go as high as 40 degrees Celsius (104 Fahrenheit), and it can become hot inside. Sleeping is sometimes impossible. On the very hot days, Marcio stays with a friend, but he prefers to be by the sea. 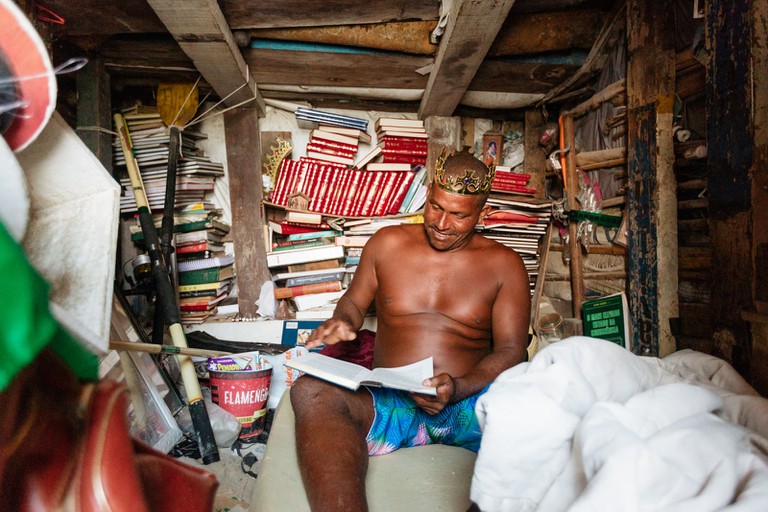 He doesn’t want to leave his place any time soon. And why would he? He has become a local celebrity and tourist attraction. Almost anyone passing by wants to take photo with “the king” and his unusual home. He even lets tourists take a seat on the throne and poses for photos with them. Some of them leave money, others do not. But he also makes money thanks to his love of books. He has a table piled with books just next to the castle, where passers can shop some books, and pay whatever price they think is reasonable.

Never Sleep Again: The Elm Street Legacy is a 2010 American direct-to-video documentary film that chronicles the entire Nightmare on Elm Street franchise, except the 2010 remake. T...

Lifestyle
Pow Wow – Healing Traditional Tribal Dance
The most common dance is the intertribal, where a Drum will sing a song and anyone who wants to can come and dance. The ...
Tudor Era Achievements – How they Changed the World We Live In?
The Tudors royal family ruled England from 1485 to 1603. They were a Welsh-English family overseeing one of the most exc...
Belchite – The Ghost Town Serves as Reminder to Spain Civil War Tragedies
The old village serve as a reminder of the tragedies that occurred during Spanish Civil War. Between August 24 and Septe...
Nagoro, Village of the Dolls – Creepiest Places on Earth
The dolls outnumber the people in Nagoro by 10 to 1. The dolls resemble scarecrows, and they ca be found anywhere in the...