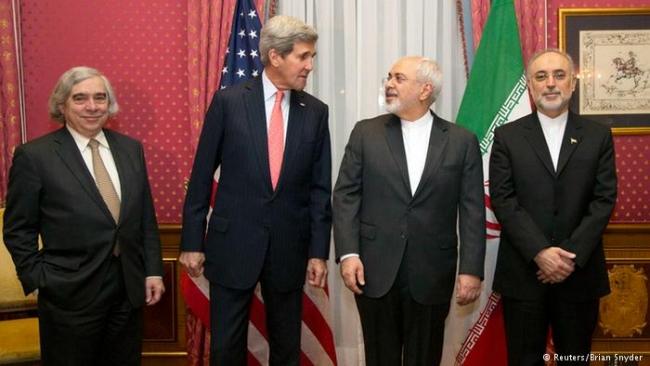 After a 12 year embargo on Iran, Washington and Tehran have struck a deal that should end the embargo and strip Iran of its nuclear powerful. President Obama was among the first to congratulate on the deal, saying that “This deal meets every single one of the bottom lines" and proves "the world can do remarkable things,". The deal also marks the cessation of hostilities between Tehran and Washington that started in 1979, when the American embassy in Tehran was stormed

After a 12 year embargo on Iran, Washington and Tehran have struck a deal that should end the embargo and strip Iran of its nuclear powerful. President Obama was among the first to congratulate on the deal, saying that “This deal meets every single one of the bottom lines" and proves "the world can do remarkable things,". The deal also marks the cessation of hostilities between Tehran and Washington that started in 1979, when the American embassy in Tehran was stormed.

The negotiations started roughly 2 years ago. Diplomats from Iran and US, along with five other countries including Russia, Germany, France, China and the UK have had negotiations since 2013. It was a 20 month process, but it is finally over.

The negotiations started the moment Rouhani won the elections in Iran. Many viewed Rouhani as a reformer, a leader who can end the hostile communication with the US and the outer world. And as many believed, Rouhani opened the ties with the West. In September 2013, Rouhani and Obama had a 30 minute phone talk, which marked the first time presidents of the two countries talked after 30 years.

Discussions started in November 20, and during the negotiations, there have been many times when it looked like there will be no deal. Several deadlines were delayed. The first breakthrough came three months ago, when diplomats set a framework deal. The framework deal established principles for the final agreement, but in recent weeks, there were problems and it looked like there will be no deal. The original deadline of the framework deal was June 30, which was stretched. Finally, on July 14, in Vienna, representatives from Iran and the six countries announced a deal has been struck.

The agreement is a huge point for Obama and his foreign policy. When Obama was elected, he inherited a foreign policy that was faced with three enemies: Russia in Europe, China was rising in power in Asia, and Iran in the Middle East. Since then, Obama has smooth out the communication with Russia, having met several times with Putin, and has also improved the communication between China and the US. The Middle East has always been tough to deal with, and former presidents have elected to bomb countries instead of making a deal. For example, Bush bombed Iraq and Afghanistan.

Early in his presidency, Obama started backtracking from the position the US has held for years. The position was that Iran must cease all enrichment of uranium. Obama began backtracking, leaving a breathing room and saying that uranium can be used for peaceful purposes, not nuclear warheads. The idea was welcomed by former presidents of Iran, such as Mahmoud Ahmadinejad. However, with Hassan Rouhani, Obama had better chances to strike a deal.

Both sides compromised in the deal. The decade long cap has been set at 6,104 centrifuges, little more than 5000 that can enrich uranium. The deal leaves Iran far enough away from capacity for making bombs, all while retaining the infrastructure that is key to the economics of the country.

After the deal was struck, Obama addressed the nation from the White House, saying that “Today after two years of negotiation the United States together with the international community has achieved something that decades of animosity has not: a comprehensive long-term deal with Iran that will prevent it from obtaining a nuclear weapon".

One thing that Obama stressed was that the deal is built on verifications, not on trust. Therefore, both sides must follow the agreement. Here are some key points from the agreement.

- Iran will be prevented from enriching uranium and plutonium and required to give up the vast majority of its plutonium stockpile. At the moment, Iran has stockpile to make 10 nuclear weapons.

- The International Atomic Energy Agency will have access to an Iranian inspection whenever it chooses.

- The deal reduces the number of Iranian centrifuges by two-thirds. The deal also limits uranium research and development to the Natanz facility.

- The deal caps uranium enrichment at 3.67 percent and limits the stockpile to 300 kg, all for 15 years.

- The US agreed to ease sanctions on Iran, but it insisted that non-nuclear penalties would remain.

The deal is just the beginning of the process, not the end. The deal struck on Tuesday just creates a process. Now, Obama and Rouhani will have to convince the parties in their country that the deal is a historic moment, and something that has to be approved. For example, Obama will have troubles with the Republicans in the Congress. Republicans were against the negotiations, and now the Congress has a timeline of 60 days to review and approve the deal. Obama encourages the Congress to approve the deal for the sake of international and national security.

Rouhani will have to deal with Israeli Prime Minister Benjamin Netanyahu who has been a critic of the negotiations for years. After the deal was struck, Netanyahu said the “agreement is a historic mistake for the world". Netanyahu believes the deal is not enough to prevent Iran from making nuclear weapons, and fears for his country’s security.

The Role of George W. Bush

The deal that Obama and Tehran struck was a historic one, but it wouldn’t be possible without the influence of George W. Bush. Now, on first glance, you probably wonder what kind of influence does Bush has on a deal that is struck years after his reign as a president is over.

Well, Bush is the one responsible for Iranian rise to power. The moment George W. Bush decided to bomb Iraq, and take the Iranian side in the story, Iran got its freedom to become a power state in the Middle East and in the Gulf. Iraq was the country that served as yin to Iran’s yang. It was Iraq that was controlling and minimalizing the damage that Iran could do with nuclear power. But once the US took over control in Iraq, and installed a “democratic” government, Iraq started supporting Iran.

Therefore, in hindsight, this deal would never be possible and would never happen hadn’t Bush bombed Iraq.

Can Iran and the US be partners?

Making peace with the American troops now will be one of Obama’s hardest challenge. While many will applaud his contribution in ironing out the differences and making the deal, there will be also some that will say that making peace with someone who kills 500 American soldiers is not an option. Republicans in the Congress, for one, are sure to oppose the deal.