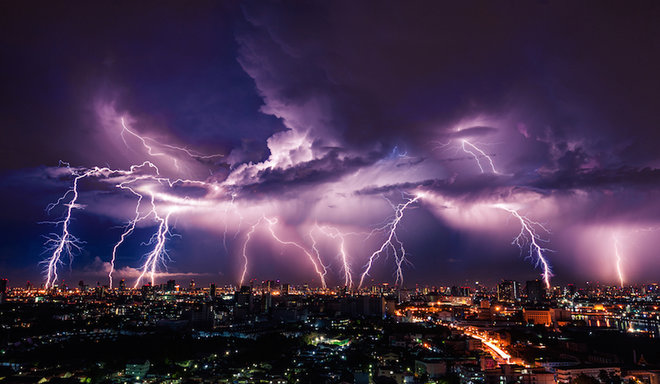 One average lightning bolt can release enough energy to operate a 100-watt light bulb for more than three months straight, which is approximately 250 kilowatt-hours of energy

Lighting kills about 2,000 people a year. It is one of the more common causes of death. Lightning flashes more than 3 million times a day worldwide, which is about 40 times a second. With that in mind, you should definitely try to stay safe form lighting. One average lightning bolt can release enough energy to operate a 100-watt light bulb for more than three months straight, which is approximately 250 kilowatt-hours of energy. Does that sound striking enough for you? If not, let’s take a look at some other facts about lighting.

What is the speed of light?

When lightning strikes a beach, or any other sand or sandy soil surface, it fuses together the grains to create a small glass-lie tube. This tube, or crystal by some, is called fulgurite.

These items are prized by collectors who pay millions of dollars for one. But they also have great scientific value, as they demonstrate past occurrence of lightning storms.

Hotter than the sun 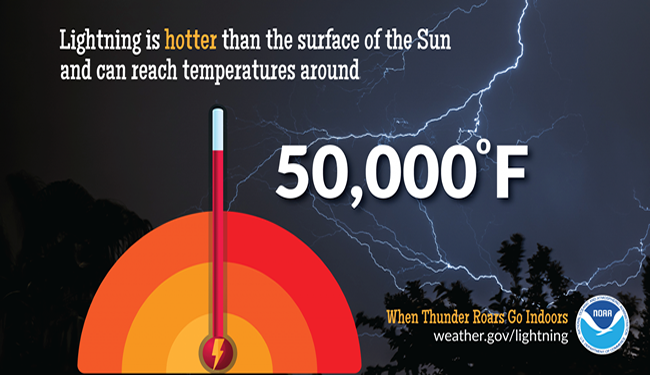 We talked about the speed of a lightning strike. But what about other characteristics? For example, the intensity of a lightning strike can make them appear as thick bolts across the sky. However, their actual width is only 2-3cm, which would be similar to the width of a thumb. Their average length is just 2-3 miles.

However, a striking fact is the charge carried down the small channel. This charge is so intense, that the temperature rises up to 30 000 Celsius, which is about five times hotter than the surface of the sun.

Life of a lightning strike

The life cycle of the lightning starts in cumulonimbus clouds, or otherwise known as thunderheads. They have a positive charge up top and a negative charge below. Scientists still do not know how the charges start, but water droplets and ice crystals carry them.

The negative charge in the cloud creates a positive charge on Earth below, and the two start trying to connect and create a circuit. It is like when electrical sparks jump across a space, but way bigger.

The air between the clouds and the Earth blocks the connection. However, that is until the charge gets so strong that an electrical impulse called “stepped leader” shoots down from the cloud. This leader drops in steps of about 150 feet each at about 136,000mph, until it reaches the ground. At the moment it reaches the ground, an electrical charge called a streamer rises up to meet it and complete the circuit. After that, a bolt of electricity streaks back up along the path of the leader at 62 million mph and creates lighting. More bolts rise at the same time, but because it happens so fast, we only see one bolt of lightning.

Can you count lightning?

Yes, you can tell how far away from a thunderstorm you are. To do that, count the number of seconds between the flash of lightning and the boom of thunder that follows. Divide the number by five, and this will tell you how many miles away you are from the storm. If you want to know the distance in km, divide by three.

The least lucky place in the world

Lake Maracaibo in Venezuela can easily be classified as the least lucky place in the world. This is the place that receives the most lightning strikes. Just think about this for a second. Massive thunderstorms occur on 140-160 nights per year, with an average of 28 lightning strikes per minute, lasting up to 10 hours at a time.

For those good at math, that is about 40,000 lightning strikes in one night.

How common are lightning strikes?

Lightning is one of the most recurrent and common spectacles in the world of nature. When you consider the whole world, there are more than 3,000,000 flashes every day. Or, to put that in perspective, 44 strikes per second.

Until the late 18th century, it was believed that ringing church bells repelled lightning. That is why many church bells had the inscription “fulgura frango” on them, which translates to “I chase lightning”.

When there was a thunderstorm, bell ringers had to run to the bell tower and ring the bells. And it was all until 1753 and 1786. Those years, in France, 103 bell ringers were struck by lightning and killed, which resulted in the custom being banned. In fact, a high tower with a metal bell is one of the worst places to be during a thunderstorm.