Getting to Know the Diomede Islands – Yesterday and Tomorrow 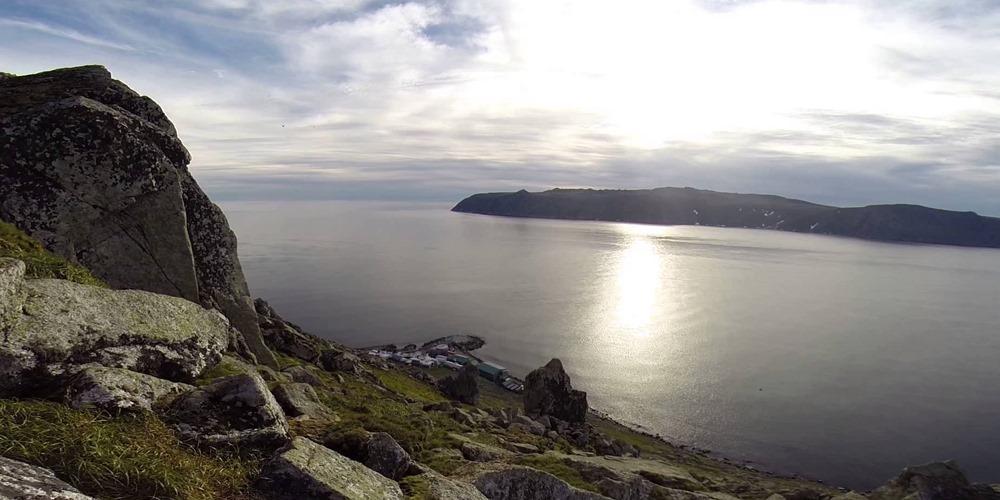 The Diomede islands are just three miles apart, but the bigger island is almost one day ahead of the smaller, 21 hours to be exact. How come? Well, they sit on either side of the International Date Line, passing through the Pacific Ocean and marks the boundary between one calendar day and the next one

The Diomede islands are just three miles apart, but the bigger island is almost one day ahead of the smaller, 21 hours to be exact. How come? Well, they sit on either side of the International Date Line, passing through the Pacific Ocean and marks the boundary between one calendar day and the next one.
Big Diomede (larger island) and Little Diomede (smaller island) sit in the Bering Strait between mainland Alaska and Siberia. 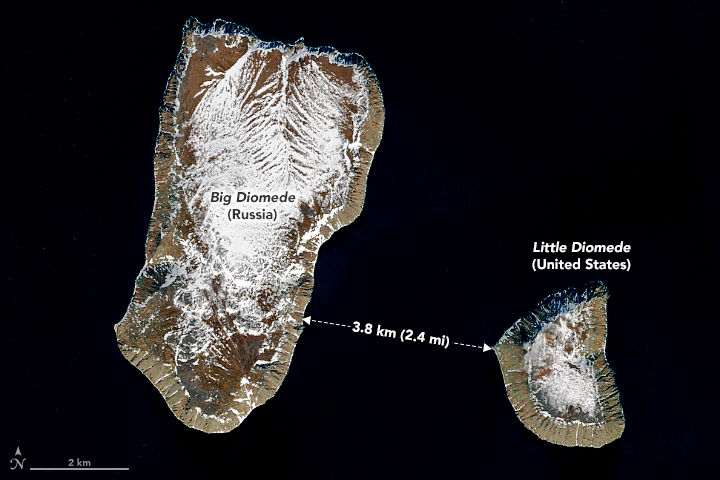 Can you walk from USA to Asia in 20 minutes?

Speaking about walking the distance, a viral TikTok video showed it is quite possible to do it. Andrew Laub on TikTok, made a video showing he can take a 20 minute walk and wind up 21 hours away.
He posted the video titled Geography Lesson Part 1: Tomorrowland, about how when parts of the Bering Strait freeze over in winter, one can walk from the US Island Tomorrow to the Russian island Yesterday.
The land masses are only 2.5 miles apart, and Laub says you can walk from the US to Russia.
The two islands site fairly close together, yet, Big Diomede is 21 hours ahead of Little Diomede in a different time zone. So, Laub says, “If you were to walk from the United States to Russia, you’d be literally walking into the next day”. Now, the video doesn’t show the narrator making the walk, and some say that the hypothesis doesn’t hold water (or ice for that matter).
In reality, there is a strong current flowing north through the strait, which usually creates large channels of open water. On occasion, these open channels can become clogged with moving chunks of pan ice. Theoretically, it is possible to jump from chunk to chunk, along with some swimming across the open leads.
Fun fact: Karl Bushby, who undertook a journey to walk the globe, walked the entire Bering Strait, part of which involved swimming.

Getting to know Little Diomede

Little Diomede, also known as Yesterday, is an island of Alaska, United States. It is the smaller of the Diomede islands located in the middle of the Bering Strait.
It is about 2.33 miles to the west of Big Diomede. Unlike the larger neighbour, Little Diomede retains a permanent native population. 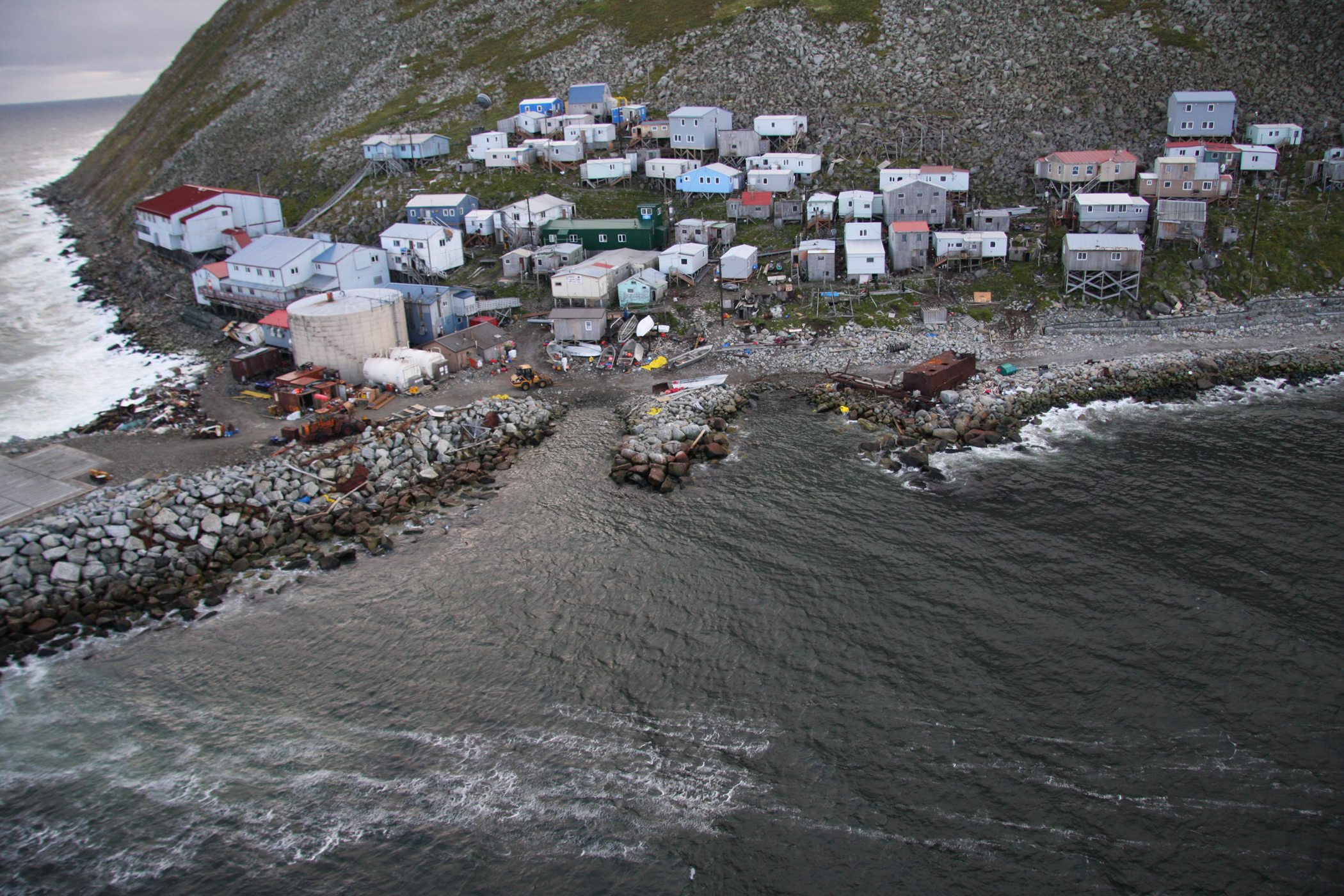 As of 2022, it had a population of 77 people, down from the peak of 178 inhabitants in 1990. The entirety of the island is in the City of Diomede.
We have to note that the island is not part of any organized borough, so some services are provided directly from the state.
Fun fact: During the Cold War, the section that separated the USSR and US, became known as the Ice Curtain. In August 1987, Lynne Cox swam from Little to Big Diomede, and was then congratulated jointly by Mikhail Gorbachev and Ronald Reagan.
The island has a total area of 2.8 square miles, all of it land. The highest point of the island is 1,621 feet, about halfway along the west coast.
The island also has a heliport, Diomede Heliport, with regular helicopter flights. During the winter, villagers carve a runway into the thick ice sheet so that bush planes can deliver vital products, including medicine. Because of the variations of the ice sheet, the runway changes position every year.

Getting to know Big Diomede

Big Diomede, also known as Tomorrow Island, or Ratmanov Island in Russian, is the western island of the two Diomede islands. It is part of the Chukotsky District of the Chukotka Automonous Okrug of Russia.
It is located 28 miles southeast of Cape Dezhnev on the Chukchi Peninsula and is Russia’s easternmost point according to the International Date Line. 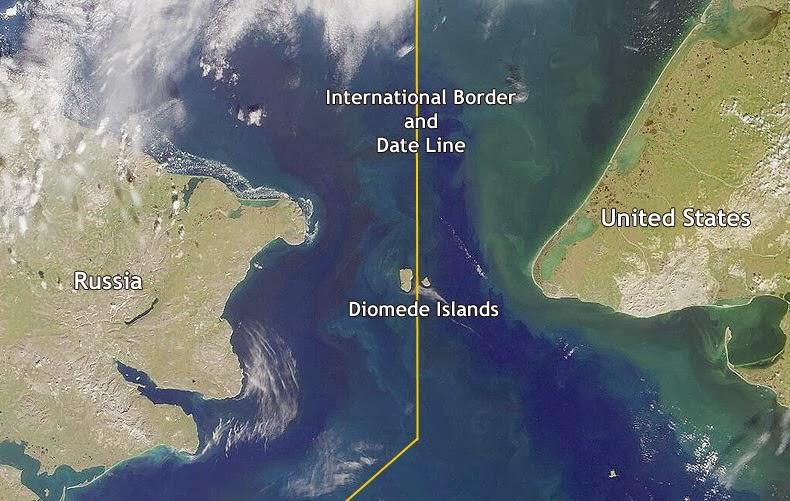 There is a small settlement on the north coast, but no permanent residents. There is also a helipad.
It was originally inhabited by Inupiat, and the first European to reach the islands was the Russian explorer Semyon Dezhnyov in 1658. In 1732, Russian geodesist Mikhail Gvozdev plotted the map of the island.
In 1867, following the Alaska Purchase, the new border between the two nations was drawn, separating Big Diomede and Little Diomede. 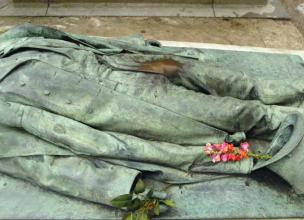 Strange
Bizarre Beliefs – The Strange Story of Victor Noir’s Grave
Victor Noir was a common journalist in France during the Napoleon era, but after his death, his grave became a legend
Top 10 Times Dogs Made it to the Guinness Book of World Records
We can safely say all dogs are amazing. Yet, some pups go above and beyond and excel at what they do. You might not know...
Demolition Town New Zealand – Trip to a Surreal Town
It is an entire ghost town made from recycled materials and mannequins. They are strategically placed to freak people out
Urine as a Beauty Product? History of Human Urine
The English word urine refers to the liquid waste product produced by the kidneys. But the word comes from the Latin wor...