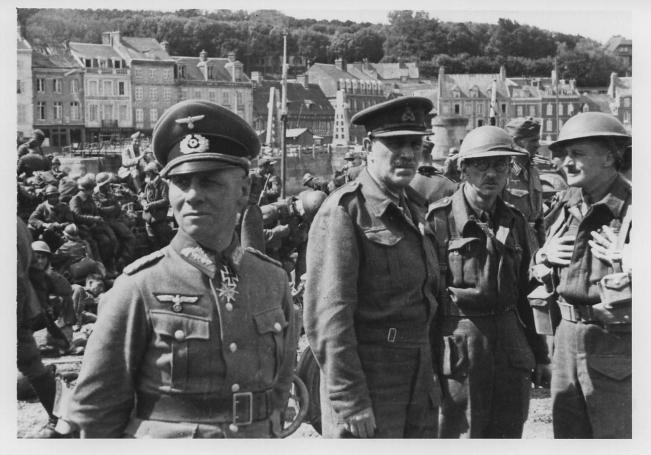 George S. Patton and Erwin Rommel were two tacticians that fought against each other during some of the crucial battles during the World War II

The World War II featured some of the most brilliant tacticians in the history of war. Both German and Allied forces featured geniuses as their generals. And while many history books focus the attention to Hitler and Allied presidents and country leaders, in reality, one of the biggest reasons for success or failure are the generals on the field. George S. Patton and Erwin Rommel were two tacticians that fought against each other during some of the crucial battles during the World War II. They are also two of the best brilliant minds and tacticians. Here is how history remembers them.

Patton is the British General that mastered the Nazis patented tactic blitzkrieg. He mastered the tactic and used it against the Nazi forces successfully. The tactic requires concentrating all available men and machines into the enemy lines, breaking the lines, and then continue to press forward even without defending the flanks. By ignoring the defense of the flanks, the enemy has no time to recover and bring reserves.

German forces used this “flanking” strategy with great success in France and Russia. Patton quickly understood the tactic and its benefits. Fast mobilization of armor gave advantage to Nazis to overwhelm the enemy. Patton used this tactic to help the British forces advance in North Africa, outmaneuvering German Tanks at the battle of El Guettar. After winning in North Africa, Patton transferred to Sicily, where he used the tactic to continue to press forward with all men available, fighting through German forces in six countries.

Today, Rommel is remembered and praised as the man who almost succeeded in stopping the Alliance and its offensive in North Africa. He was set up against General Bernard Montgomery of Britain and later General Patton.

Rommel showed great success in the Axis push through France and Belgium. As a reward, he was promoted to General, and transferred to North Africa. His orders were to hold ground in the Saharan desert until Hitler conquers Britain and then transfer the manpower to North Africa.

Two factors contributed to Rommel losing North Africa. The first one was his lack of strategic skills, and understanding of the war and his mission. Rommel took an offensive approach in North Africa, trying to conquer other countries. The second reason was Hitler declining to send reserves and fuel. Rommel ran out tanks and fuel.

However, even with the limited resources he had, Rommel had huge success against the British and American force in North Africa. Rommel used the famous flanking tactic to do so, one of the tactics that the Germans used in flat terrains where their tanks could inflict maximum amount of damage. Rommel won the Battle of Gazala, where lost only 114 tanks, compared to 540 tanks lost by the British. He won the battle, even though he was outmatched in numbers, as the British sported an army of 175,000 soldiers compared to just 80,000 by the Germans. But Rommel did not stop there, and tried to get as much ground as he can from the fleeting Allies.

The Battle of Gazala, which lasted from May 26 to June 20, was Rommel’s single biggest success. He took a great risk, by droving his army around the flank of the Allied army and into the rear of the British. He was trapped between the British minefields and faced with the risk of running out of ammunition, Rommel managed to outmaneuver and repulse every counter-attack by the British.

And while the Battle of Gazala showed his impeccable tactics and genius mind, the Battle at El Alamein showed that he lacked strategy to win the war. Rommel marched his forces deep into Egyptian ground, where the land was not suited for his flanking strategy. His forces were tired, and dug themselves in. The result was an obvious defeat, and Rommel began retreating. In the end, he fall victim to the strike by General Montgomery.

Both Rommel and Patton were highly respected in their respective opponent’s camp. Rommel’s respect came not from his skill alone, but also from the fact that the general was not part of the Nazi Party. There were plenty of “incidents” that showed Rommel as a honorable man serving in a dishonorable system.

For example, Rommel disobeyed Hitler and his orders several times, including in El Alamien. Hitler had a “no retreat” command, but Rommel ordered retreat in order to save the lives of his men. Rommel also disobeyed orders for immediate executes of Jewish commandos in Allied uniform.

The British built a myth around the genius of Rommel. Churchill even named him in the House of Commons. However, it is worth noting that part of it was British strategy in showing Rommel as an extraordinary commander, which looked better than admitting that the British were not prepared for the war and admit its shortcomings. Rommel is just one of the few German commanders that have received sympathetic treatment in biographies written by British officers.

Erwin Rommel was a great tactician, arguably the best one during the World War II. However, he was a lousy strategist, and that was his biggest weakness. The biggest mistake Rommel did during World War II was crossing into Egypt, despite being ordered and advised not to. He crossed into Egypt following the capture of Tobruk. But there, he faced a ground where his flank tactics wouldn’t work which set up his defeat and failure at El Alamein.

Another weakness of Rommel was his lack of staff training. Therefore, Rommel never fully grasped the importance of the war in North Africa. While the campaign was defensive for the Axis, Rommel took an offensive approach. He never achieved a lasting victory, and he never settled for one spot on the line. His flaws, and his offensive approach, always marching forward is one of the reasons that contributed to the bankruptcy of the German Army during the War.

General Patton was also respected in the opponent’s camp. The British commander impressed the Germans by using their own tactics and was the one that came the closest to their concept of battling. Patton was initiative and showed lighting-like action, two characteristics that were praised by German generals.

Some German generals went as far as saying that they would have done the same in his place. They praised him a great tank specialist.

While many applaud Patton for his success in the war in Africa, he had his greatest success on the Western Front. For ten months, Patton was leader of the Third Army that roamed through France, Germany, Luxemburg, Belgium, Austria and Czechoslovakia. During that time, Patton captured more than 750,000 Nazi soldiers and killed or disabled more than 500,000 other Nazis. He managed to cross the Seine, the Moselle, the Rhine, the Loire, the Saar, the Danube and many other rivers.