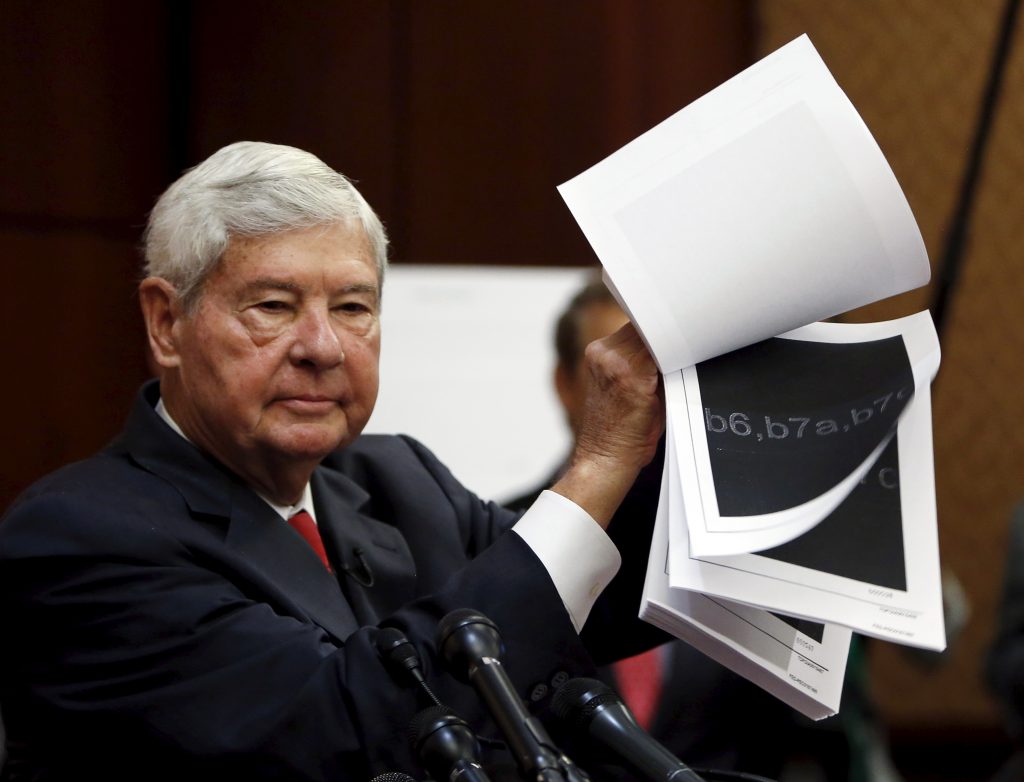 There are almost 30 names in File 17. Most of those are Saudi names. And now, 13 years after Bush classified the 200 pages report, we can have a look in it

In 2002, George W. Bush classified more than 200 pages showing specific financial links between the 9/11 terrorists and the Saudi Arabia government. More than 13 years later, the Obama administration has declassified 28 pages of the report. The report contains more than 30 names that were suspects for the 9/11 attacks.

The document, known as File 17, holds secrets and teases at a Saudi involvement of the 9/11 attacks. It is worth mentioning that the 28 pages are just a portion of the repot in 2002 that spans more than 800 pages. The value of the 28 pages is diminished due to the fact that they were written before the 9/11 Commission. The Commission, after investigating all the leads, issued a statement saying that “it found no evidence that the Saudi government as an institution or Senior Saudi officials individually funded the hijackers”. One of the quotes in the File 17 pages states “Here are some additional questions that are still unanswered, and what we think the Commission, the FBI and the CIA should do to find the answer”.

That being said, let’s take a look what is inside the documents ,the ramifications and what to expect next in the US – Saudi relations.

The Names in the document

There are almost 30 names in File 17. Most of those are Saudi names. Here are some of the names explained.

Let’s start with Fahad al-Thumairy, a Saudi consular official, and an imam of a mosque in California. He was a suspect, as the one who helped two of the hijackers after they arrived in Los Angeles.

The next notable name on the list is Omar al-Bayoumi, another Saudi national suspect. He is believed to be friend with two of the hijackers. He was also in a constant phone contact with al-Thumairy.

According to reports, al-Bayoumi had notable relations with the Saudi government, and local Muslims in San Diego. American intelligence suspects he was a counter intelligence officer for Saudi Arabia. He left the States just before the 9/11 attacks.

Outside of these two, John Lehman, a 9/11 Commission member, says that there will be other notable names that the average intelligent American will recognize. Some insiders believe that some of the notable names will be Prince Bandar bin Sultan al Saud, a former Saudi ambassador to the US. There are also cashier checks, suggesting Bandar’s wife was also included in aiding the two Saudi citizens responsible for the hijacking of the planes.

Before we see what is next for the US – Saudi Arabia diplomatic relations, as a direct result of declassification of the documents, let’s review their history.

The US and Saudi Arabia began their diplomatic relations in 1933. At the time, Saudi was an Islamic absolute monarchy, and the US was a democratic republic. But despite their differences through the years, they stayed allies and partners.

Oil was and still is one of the crucial aspects of the diplomatic relations. In 1933, the “California Arabian Standard Oil Company”, or CASOC started oil exploration of Saudi Arabia. The company was later renamed to ARAMCO, or Arab American Company, and during World War II, the company produced about 42.5 million barrels of oil. That was just 1% of the output in the US. By the end of 1950, Aramco and the Saudi government agreed on a 50-50 profit sharing. However, by the end of 1980, the Saudi gained full control of the oil company, and in 1988, they issued a royal decree, naming Saudi Arabian Oil Company to replace Aramco.

The diplomatic relations between Saudi Arabia and the US have had its ups and downs. After World War II, they were partners in the fight against Communism. The two countries supported stable oil prices, stable oil field, and stability in the Western economy. The Americans aided the Saudi during the Cold War as well.

One of the biggest obstacles the relations had to endure was the oil embargo of the 1964. King Faisal issued an oil embargo against the UK and the US, causing an energy crisis in the States. The embargo was lifted 10 years later.

The relations got stronger during the Gulf War, with Saudi Arabia and the States standing on the opposite side of Iraq and Saddam Hussein.

Another rift between the two countries happened in 2013, due to their different opinion in regards of the Syrian civil war. Prince Bandar bin Sultan suggested a distancing of the relations, and in October 2013, the Saudi rejected a rotating seat on the UN Security council. The relations improved with Saudi Arabia supporting the Western-negotiated interim agreement with Iran.

The publication of the missing 28 pages is inevitable, and the wide assumption is that the process won’t stop there. Back in 2014, Obama ordered declassification of the 28 pages. The pages were initially blocked by former US President George W. Bush. At the time, Bush did not want to harm the diplomatic relations with Saudi Arabia. So, what can we expect next?

The head of CIA, in June this year, said that the pages will be published. However, he stressed that Americans should not expect much of them, as there is no real evidence implicating that Saudi Arabia is helping the terrorists. In his opinion, John Brennan, said that “everyone will see the evidence that the Saudi government had nothing to do with it”.

The two main questions that remain to be answered are what happens if Hillary becomes president, and will victims be able to bring lawsuits against nation-states. In May this year, the US Senate passed a bill, called Justice against Sponsors of Terrorism Act. The act allows victims of terror attacks, such as 9/11 to bring lawsuits against nation-states. Obama threatened to veto the bill, and Saudi Arabia also spoke strongly against the legislation. Just for reminder, 15 of the 19 terrorists involved in the 9/11 attack were Saudi citizens.

The more important question, probably is the Hillary question. Clinton has the chance to become the first female president, but Wikileaks hasn’t done much favor in her Saudi diplomatic relations. In one of the cable leaks controversies of 2010, a 2009 State Department communication between Hillary and other members of the Senate, she said that “"donors in Saudi Arabia constitute the most significant source of funding to Sunni terrorist groups worldwide”. However, it is worth noting that part of those profits come through “zakat”, an act of charity by the Islam. The zakat is an amount of money that all Saudis, including all Muslims have to pay to charities. The amount is equal to 2.5% of their income. How will Hilary recover from the Wikileaks controversies and will she be able to hold the Saudi diplomatic relations?

Political
Buzludzha Monument – Abandoned UFO Cold War Monument
The cost of the building process was 14,186,000 leva, which equals to $35 million in today’s rates. The monument was ...
America’s First Ladies: Fun Facts you didn’t know
The First Lady needs to be respectable, presentable, smart, intelligent, and so on. So far, America has had some great F...
The Mystery of Oak Island? Is there something there?
The privately owned island has much more to offer, but the most famous spot is the location now known as “the Money Pi...
Max Spiers – All the conspiracy theories
Spiers was found death in his home, and there were no signs of struggle or fight. However, his mother believes that it w...