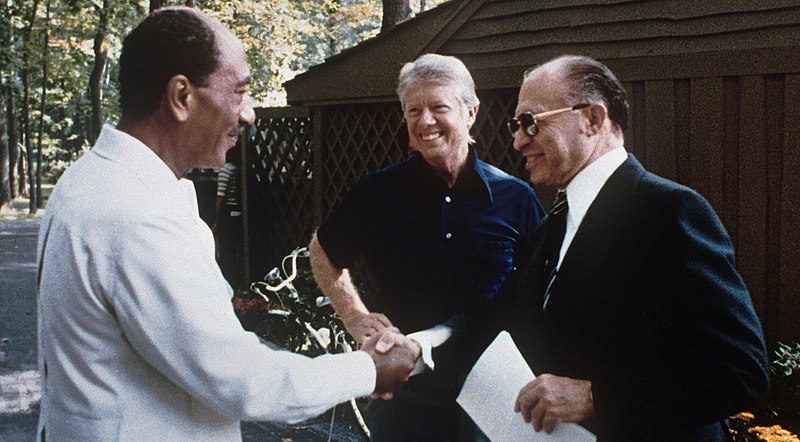 For more than 40 years, Egypt and Israel peace treaty serves as a stabilizing force in the Arab region

This year, we celebrate four decades of the signing of the peace treaty between Egypt and Israel. Even though the peace has been challenged at times, the relationships between the once enemy countries have remained intact for more than 40 years.

The treaty was signed on March 26, 1979, following the 1978 Camp David Accords. Signed in Washington DC, between then Egyptian president Anwar Sadat, and Israeli prime minister Menachem Begin. US President Jimmy Carter was one of the witnesses of the signing.

Israel and Egypt were battling since 1948, war that began with the independence and forming of Israel. One of the reasons why the treaty has remained is because Egyptian leaders always defended the document.

According to many analysts, the treaty is one of the foundations for stability of the region, despite conflicts between Arab countries.

The 40 year anniversary is happening in a time of great changes of the policy of the United States. President Donald Trump recently acknowledged Jerusalem as capital city of Israel, causing rage all around the Muslim world. In May 2018, USA moved their embassy from Tel Aviv to Jerusalem. Trump also recognized Israel’s annexation of the Golan Heights, which Israel took from Siria.

What is in the treaty?

Since the treaty was signed, the two countries worked on normalization of relations between them. The normalization of relations went into effect in January 1980, and ambassadors were exchanged in February the same year. The boycott laws were repealed by Egypt’s parliament the same month, and the two countries began developing a trade. In March 1980, regular airline flights were inaugurated, and Egypt began supplying Israel with crude oil.

On May 1981, Egypt, Israel, and USA opened negotiations to set up a peacekeeping organization outside the framework of the UN. In August the same year, they signed the Protocol to the Treaty of Peace, with a sole goal of monitoring both parties. The result was demilitarization of Sinai.

The peace treaty also includes a stipulation, or the Agreed Activities Mechanism, that allows the countries to jointly alter the arrangements of Egyptian troops in the Sinai without having to officially review the treaty itself. In 2011, Israel allowed Egypt to deploy forces to central and eastern Sinai out of mutual security concerns.

While many Western leaders applauded the treaty, it was received with enormous controversy across the Arab world. There, it was condemned and considered a stab in the back. Palestinians were among the loudest critics of the treaty. Yasser Arafat, then leader of the Palestine Liberation Organization, stated “Let them sign what they like. False peace will not last”.

Egypt was suspended from the Arab League from 19879 to 1989. The president Sadat was assassinated on October 6, 1981 by members of the Egyptian Islamic Jihad.

The treaty was under pressure a couple of times, but the critical point was during the Egyptian revolution of 2011. It led to fears in Israel regarding the future of the treaty. Benjamin Netanyahu, prime minister of Israel, stated that he expected any new Egyptian government to keep the peace treaty. Once the Egyptian Army took power of the country on February 11, 2011, they announced that Egypt would continue to abide by all its international and regional treaties.

What Egypt gained with the treaty?

The benefits for Egypt are mostly economical. Thanks to the treaty, Egypt received more than $40 billion in military help and $30 billion in economic help from the United States of America in 1980 alone. Help was suspended from 2013 to 2015, but it was quickly back to normal.

For the United States of America, Egypt serves as the backbone of the peace in the region and stabilizing force.

48:34
Military/War
The Last Day of World War One

The First World War ended at 11am on 11th November 1918, having taken the lives of 9 million soldiers. But what happened on the last day of this conflict?Travelling to the Battlefi...

Mossad is one of the main entities in the Israeli Intelligence Community, along with Aman (military intelligence) and Shin Bet (internal security). Mossad is responsible for intell...

History
How much Do You Know about Circus?
Most people associate the term circus with Great Britain. After all, it was in UK that circuses gained popularity during...
Why is Roman Concrete so Strong and Durable?
Roman Empire structures lasts for thousands of years. The Western Roman Empire crumbled to dust more than a thousand yea...
Kamikaze – How Effective were they during WWII?
The infamous suicide missions carried out by Japanese pilots were not enough to defeat the US. Still, the kamikaze aircr...
Yamato Battleship – History and Cultural Significance
The Japanese constructed the ship to act as a counter to the numerically superior battleship fleet of the US. Laid down ...