Clementinum in Prague is one of the world's most beautiful libraries 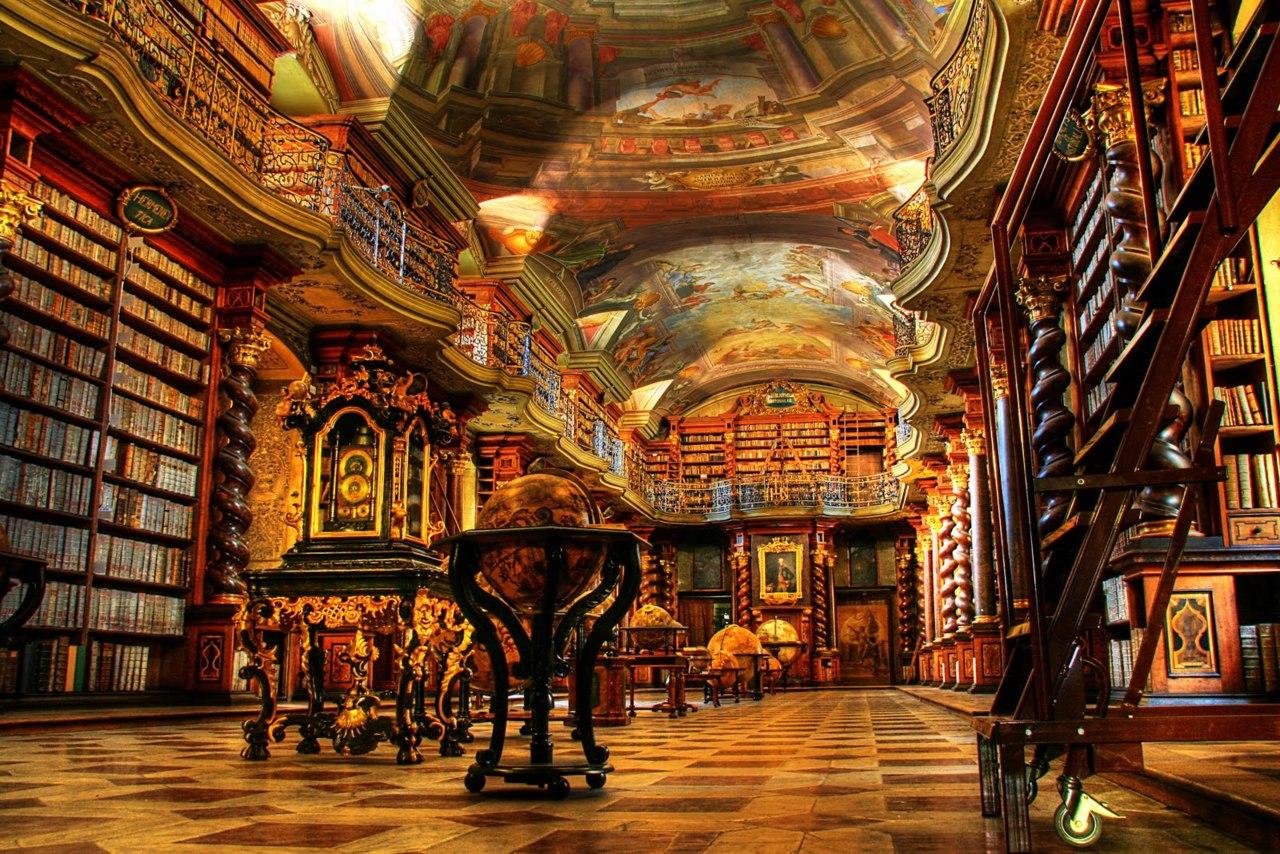 Nowadays, the Clementinum remains a vast complex of beautiful baroque and rococo, serving as a reminder of a period in which Prague was expanding. Many of the buildings in the Clementinum are closed for the public. However, visitors can freely walk through the courtyards, or take the guided tour through the Library Hall, the Chapel of Mirrors and the Astronomical Tower

There are few libraries in the world that can compete with the sheer size of the Clementinum, or Klementinum in Czech. With the enormous collection of books, murals and frescoes inside, and history on its side, the Clementinum can surely boast the title “world’s most beautiful library”. Since 2009, the technical library and the Municipal library have moved to a new home, the Prague National Technical Library, but the Clementinum still boasts a large amount of books. The story of the library starts in 1722, when the library was one of the Jesuit Universities across the world. There was a time when the library was the third largest Jesuit College in the world. Nowadays, the impressive library is the home for more than 20,000 books. What makes the book collection impressive is that there are some rare examples in the collection, books you cannot find anywhere else in the world. Some of the rare books are scheduled to be part of Google Books.

The history of the Clementinum library dates back to the 11th century, when it was a Chapel dedicated to St. Clement. In the medieval period, a Dominican monastery was founded inside the Clementinum, and in 1556 the library was transformed into a Jesuit College.

Habsburg emperor Ferdinand I was responsible for turning the library into a College. Back in 1556, he invited Jesuits into Prague in an effort to boost the power of the Roman Catholic Church. Jesuits chose the library, which was flagship building in Prague at that time, as a property for their College. Jesuits gradually built up most of the neighborhood around the Clementinum, and they finally finished the building in 1653, one century after work started. After it was finished, the library was the largest building in the city, just after the Prague Castle.

In 1773, the Jesuit College became part of Charles University, as Jesuits fell out with the pope. It was that year when the Clementinum officialy became a library, observatory and university by the Empress Maria Theresa of Austria.

The National Library, set inside the Clementinum, was founded in 1781.

Nowadays, the Clementinum remains a vast complex of beautiful baroque and rococo, serving as a reminder of a period in which Prague was expanding. Many of the buildings in the Clementinum are closed for the public. However, visitors can freely walk through the courtyards, or take the guided tour through the Library Hall, the Chapel of Mirrors and the Astronomical Tower.

- At one time in history, the library was the third largest Jesuit college in the whole world.

- Jan Hiebl is responsible for the amazing interior work, including the murals and fresco work.

- The Library Hall includes the Temple of Wisdom, a section of the library housing thousands of theological books that date back to the 1600s.

- The Chapel of Mirrors, another section in the library, dates back to the 1720. The highlight of the Chapel is an ornate confection of gilded strucco, ceiling mirrors and lots of fancy frescoes.

- The library is still one of the most popular venues for concerts of classical music.

- The Clementinum includes two churches, which are the Church of St. Clement and the Chapel of the Assumption of the Virgin Mary. The latter was built in 1600 for Italian artisans working in the library. The Chapel is still property of the Italian government. The Church of St. Clement, on the other hand, was a highlight during the baroque period, and is now redesigned into a Greek Catholic Chapel.

The Clementinum library was once declared the World’s most beautiful library, in an article by Bored Panda in September this year. And while Bored Panda is not National Geographic or New York Times, it still has a large amount of readers for photo essays.

The library is described as “far beyond anything that people can expect, and definitely something you need to put on your bucket list”.

Strange
David Copperfield - The Mystery behind the Tricks
The secret of the tricks has never been publicly explained. However, there are ways to explain how he does the tricks. O...
Women in Refrigerators - 7 Most Important Women Characters Killed to Hype a Male Character in Comic books
Aside from few comic books written specifically for female characters such as Wonder woman, Cat Woman, Black Widow, Rave...
Japan - The home of world's most beautiful festivals including Cherry Blossom Lantern Festival
Some of the festivals celebrate Japanese culture, while others are celebrate times of the year
Guide to Studying Film Production at University
Want to take your passion for documentaries to the next level?