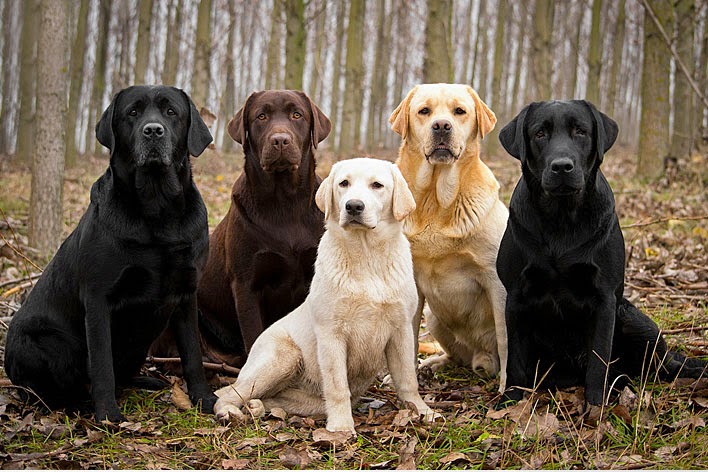 For the past three years, the top 5 dog breeds have stayed the same, and Labrador Retriever is still the most popular dog breed in America

Arguably the best family dog out there, Labrador retriever is a type of retriever-gun dog. Even though they were used as military dogs during the Vietnam War, Labrador retrievers are actually fun and friendly dogs. They are excellent for children of all ages, but they also friendly with everyone around them. However, they can sometimes be little conservative, and much more independent than their siblings, Golden Retriever. Labradors can be stubborn from time to time, and their tendency to chew objects has to be controlled.

Labradors stay teenagers for years, which might sound fun on first glance, but it requires a patient owner to keep with their personality. Their cheerful nature can sometimes mask the downsides of owning a Labrador, which include: shedding, excessive requirements for exercise and running, rowdiness and exuberant jumping.

One of the most loyal dogs on the market, German Shepherd dog has long ago became a popular family dog that you can keep in the cities. Much more than just a shepherd dog for the mountains, the German Shepherd has a distinct personality. He is direct, fearless, but never hostile. His self-confidence is off the charts, and his energy level can go to vigorous levels. German Shepherds require as much mental exercise as physical, and when they are bored, they can be tad destructive. One of the downsides is they shed a lot, like 365 days a year.

The Golden Retriever is dubbed as extremely intelligent breed that was once in the possession of Lord Tweedmouth. The lord wanted a skilled dog for the Scottish climate, rough terrain and conditions. To get the retriever he needed, the Lord crossed his tweed water spaniel with Irish setter, and got the now yellow dog known as Golden retriever. Trustworthy with everyone, cheerful, with a kind expression, the Golden retriever is excellent family dog that requires two walks per day, lots of fetch games, and can adapt to every lifestyle. You’ll rarely catch a Golden retriever barking, and even he barks, he does it as a welcoming sign.

Also known as the English bulldog because of origins tracing back to Britain, the bulldog is one of the most popular, and one of the most expensive dog breeds in the world in the same time. The perfect bulldog is medium in size, has smooth coat, massive short-faced head and wide shoulders. Unlike the previous three breeds, the bulldog doesn’t require much walking and exercise, and you’ll often catch him sleeping. But don’t mistaken the bulldog as a lazy dog. Even though the bulldog will spend more than 10 hours sleeping or lying in some corner, once you take him out for a walk, he will start running like never before. Their best trait, however, is their affection for their owners.

The beagles popularity has fallen little in the last two years, from No.4 to No.5, but they are still one of the most popular and common dog breeds in the world. A small sized hound, the beagle has a similar appearance as a foxhound. Being as they are hunting dogs, beagles require tons of exercise and running, often more than what their owner can provide. Their stubbornness is their biggest downside, and because of it, training doesn’t go as smooth as with other popular dog breeds. Even though they are hunting dogs, beagles are friendly with people around them, good-natured and peaceful. You won’t catch a beagle getting into a fight with any other dog. Their biggest advantage is their coat that is easy for taking care, and they shed very little.

A smaller breed than bulldogs, “frenchies” came to this world in 1800, when the Bulldog was imported to France, and Frenchmen needed some smaller breed. Their comical attitude is their biggest advantage over any other dog breed. They can be both friendly, and reserved, depending of the people and dogs around them. The downside is they snort a lot, and they can be gooey, though not as much as their bigger bulldog brothers. But their stubborn personality is a challenge.

Yorkies are a perfect blend of small dog requirements with a personality of a terrier dog. Most terriers are known for their stubborn personality and their independence, but the yorkies can be quite friendly. However, that applies mostly for their owner. When they are around other people and pets, the Yorkshire terrier is known to look for solitude and protection by his owner. The yorkie has become one of the most popular breeds for Hollywood A-listers, as the puppy can fit in any purse and loves sitting in your lap for hours. Poodles are one of the most versatile breeds in the world. They can be fluffy, but they can also be groomed into shorthaired, normal looking dogs. It all depends on their owner’s preference. And that versatility is what makes them extremely popular, especially with female owners who love to try different hairstyles with their dogs. Another misconception about poodles is that they are lazy dogs. The reality is quite the opposite, as poodles are energetic athletes that are extremely smart and intelligent, making them most trainable breed.

Back in the 19th century, rottweilers were used for pulling carts with butchered meat to the market. Their history, however, dates back to the Roman Empire as one of the oldest herding dogs. Nowadays, they are family dogs that are friendly, despite their appearance that might suggest otherwise.

Truth be told, there are people that are using rottweilers as fight dogs. They were also used as police dogs during the First and Second World War. However, the muscular dog respects their assertive owner. Some express hostility and volatile temperament towards other dog breeds, especially if they are from the same sex. But in the right hands, the Rottweiler is the best and most loyal companion.

Their droll is the biggest downside, as Boxers can be slobbering, snorting, and snoring dogs. They have unnaturally small face, but they are quite animated, playful, cheerful and friendly. With the right exercise and training, boxers make for excellent family dogs. Another downside is they bark excessively due to their watchdog personality, which makes it hard for the neighborhood. They have guarding and territorial instincts, and whenever they see something out of the ordinary, boxers express their opinion by barking. They require almost minimal grooming, and shedding is not an issue.