When This Homeless Man Played the Piano, His Life Was Transformed Forever! 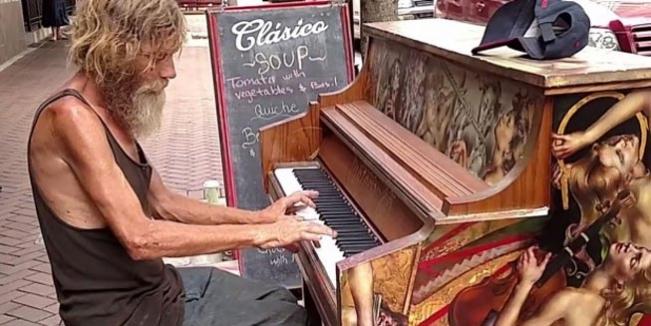 Every day, Donald Gould, a homeless ex US Marine, would sit outside a Florida café playing the piano for tips. But it wasn’t until a woman named Aurore and her son captured him on video, playing a beautiful rendition of Styx “Come Sail Away” and uploaded it to Youtube, that this man became an overnight sensation, changing his life forever

The video quickly went viral, with comments flooding in from people all over the world wanting to help. Overnight it reached over 100,000 hits and now the video has been watched by over 10 million people! This interview with Donald took place the day after his video was uploaded.

His wife died in 1998 and that began the years of substance abuse that followed and led to him being homeless. He also lost custody of his son Donny when he was three years old during this time and never saw him again.

During an interview with WFLA Donald said “Every day it’s painful. There’s not a day that goes by that they took him that I ain’t thought about him. He turned 18 last August 24th, and I wish he would come find me.”

But amazingly, since his video was shown to the world Donald has now rekindled with his beloved son who he treasured in his heart and one day, longed to see again.

“Music took me around the world before I was 21 and somehow, my music now has gotten me back together with my son.” Donald said in an interview with 24 Hour News 8.

Donny’s adoptive parents Darryl and Terri saw the touching video of his birth father, pleading to see him again and showed it to Donny.

The two were reunited with the help of WFLA who set up a video chat between the two and a Gofundme page was set up to help raise funds and set Donald back on the right track. It raised a whopping $40,000 in just 8 days! Donald has also had an offer from Michigan's Spring Arbor University for a full scholarship and various different music establishments have been seeking his musical talents to set their stage.

Donald has now checked into a rehab in the hope of changing his life entirely and finally getting away from the substances he struggles with on a day to day basis. Check out this video of Donald’s makeover and transformation courtesy of INSIDE EDITION.

Good luck Donald, we hope you are well on the way to recovery and wish you all the best!