The Man Who Lives Without Money 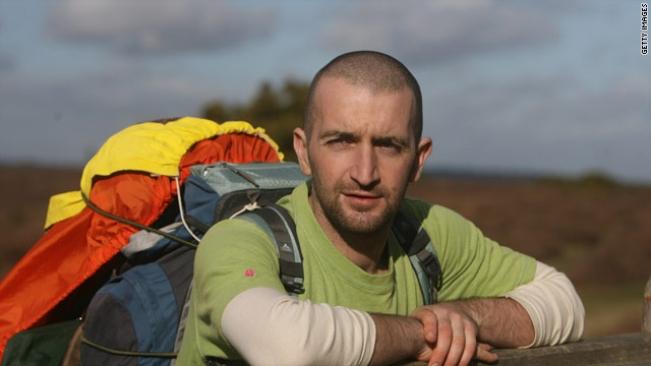 Do you ever wonder what life may be like if you were to give up all of your materialistic goods and live without money? That is exactly what Mark Boyle has done, and he is in no hurry to go back to the rich lifestyle he used to live.

Mark started off his successful career by gaining a business degree at the Galway-Mayo Institute of Technology, going on to manage two organic food companies after a move to the UK. But after watching the film Ghandi, Mark realised that a life that revolves around money comes with many drawbacks. Ghandi mentions that we should "be the change we want to see in the world" and this is something that Mark pondered for some time while managing his organic food companies, until a conversation with a close friend came about that led to his drastic lifestyle change.

“My eureka moment came during an afternoon's philosophising with a mate. We were chatting about global issues such as sweatshops, environmental destruction, factory farms, animal testing labs, wars over resources, when I realised I was looking at the world the wrong way – like a western doctor looks at a patient, focusing on symptoms more than root causes. Instead, I decided to attempt what I awkwardly term "social homeopathy".

I believe the key reason for so many problems in the world today is the fact we no longer have to see directly the repercussions of our actions. The degrees of separation between the consumer and the consumed have increased so much that people are completely unaware of the levels of destruction and suffering involved in the production of the food and other "stuff" we buy. The tool that has enabled this disconnection is money. If we grew our own food, we wouldn't waste a third of it as we do today. If we made our own tables and chairs, we wouldn't throw them out the moment we changed the interior decor. If we had to clean our own drinking water, we wouldn't waste it so freely.”

So he made the bold decision to radically change his way of life. To get rid of all of his materialistic goods and live life without money. He planned to do this for just one year initially but Mark is still continuing to live this way now, nearly three years on.

“The first step in the process was to find a form of sustainable shelter. For this I turned to the amazing project Freecycle, through which I located a caravan that someone else didn't want any more. I also needed somewhere to put this new home, so I decided to volunteer three days a week at an organic farm near Bristol in return for a place to park my caravan. Had I equated this in terms of my previous salary, it would be like paying penthouse apartment rent for what was effectively a little tin box. But that was the type of thinking I was now trying to get away from.

Having no means of paying bills, the next challenge was to set this home up to be off-grid. For heating I installed a wood-burner I'd converted from an old gas bottle, using a flue pipe I had salvaged from the skip. I fuelled it using wood from trees we coppiced on the farm, meaning fuel miles became fuel metres. A local member of the Freeconomy Community (the alternative economy which I founded in 2007), then showed me how to make a "rocket stove" from a couple of old olive oil catering tins that were destined for landfill. This meant that for the next 12 months, I was going to have to cook outside. I was a touch overwhelmed by the thought of cooking in the snow, rain and northerly winds of a British winter. But, surprisingly, it has become one of the joys of my life.”

During this time he came to appreciate nature in a whole new light, falling in love with his new lifestyle and currently has no plans to go back to his old ways.

“While feeding the stove with broken-up old vegetable boxes, I would watch the moon rise in winter and the sun set in summer for the time it took to prepare my evening's repast. Birds in the trees around my kitchen became my new iPod, and observing wildlife taught me much more about nature than any documentary I'd seen on the television.” The only electrical things he possesses are his laptop and phone which he uses only to receive calls and stay in touch with loved ones. He installed a single solar panel on his caravan when he first started, giving him enough electricity for light and to power his small amount of technology.

“The last piece of my off-grid puzzle was a compost toilet. This should really be the symbol of the entire sustainably living movement, in the way the spinning wheel became a symbol of Swadeshi in India. Representing sanity and a respect for the earth, I made my alternative loo out of old pallets from a nearby hardware store. As I can no longer buy toilet roll, I relieve the local Bristol newsagents of some of the newspapers that fill their bins every day, and use them instead. It's not double-quilted but it quickly seems normal, and I even used a story about myself once . . .

I wash in a river or under a solar shower (better in the summer), and rarely use soap, but if I do I go for home-grown soapwort. For toothpaste I use a mixture of cuttlefish bone, which gets washed up on the UK's shores, and wild fennel seeds.”

On the farm where he settled in his new home, Mark grows a lot of his own food, including potatoes, beans, kale, carrots, salads, root vegetables, squash, onions and swede. He also spends a lot of time foraging the environment for nuts, berries, nettles and mushrooms, while also searching out home remedies for things like hay fever using greater plantain. The rest of the food he consumes comes from local restaurant and shop food waste and bartering with locals giving him a sustainable food source.

“But what I soon realised is that, in a money-less world, everything takes much more time. Hand-washing my clothes in a sink of cold water, using laundry liquid made by boiling up some nuts on my rocket stove, can take two hours, instead of 10 minutes using a washing machine. Finding stuff in skips – such as the steamer I cook with – takes far longer than popping out to the shops for one, and sorting out the compost toilet is a lot more hassle than flushing it "away".

Cycling the 36-mile round-trip to Bristol also takes a lot more time and energy than driving or catching the bus or train, but it's also an economical alternative to my old gym subscription, and I find cycling much more enjoyable than using motorised vehicles. The point is, I'd much rather have my time consumed making my own bread outdoors than kill it watching some reality TV show in a so-called "living" room.

Where money once provided me with my primary sense of security, I now find it in friends and the local community. Some of my closest mates are people I only met because I had to build real relationships with others based on trust and kindness, not money.”

Medicine
19 Addictive Facts about Heroin
The substance enters the brain rapidly, and then changes back into morphine. Heroin binds to opioid receptors on cells l...
Meet Betty Cohen – The Woman who made the 90’s Awesome
Betty Cohen founded Cartoon Network in 1992, and she brought some of our favorite cartoons to life
Top 5 Most Intelligent Dogs
“Do dogs really think”, “can dogs communicate with us”, “how can we understand our dogs”?
Civil Rights History: Six women you need to know of
Martin Luther King Jr. might be the first synonym for civil rights, but there were some extraordinary women in the movem...