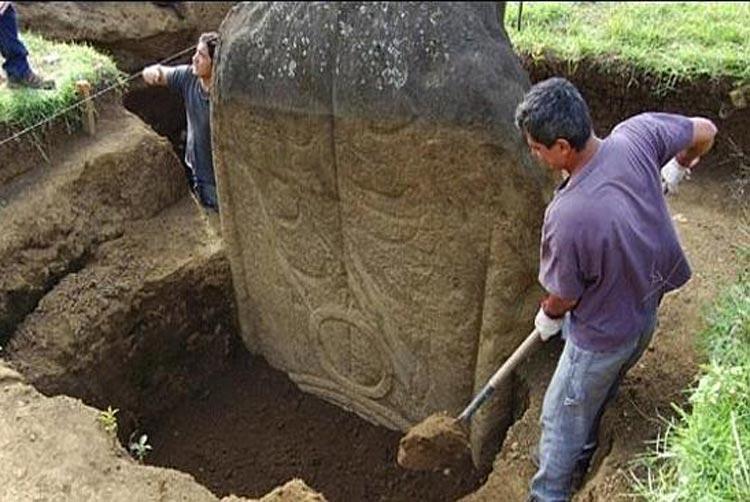 The Moai are the prominent statues of Easter Island off the coast of Chile, South America and are well known around the globe. But many are unaware that the statues are not only heads placed around the island, but full bodied gigantic statues, buried beneath the ground, on stone mounts. It is only recently though, that archaeologists have discovered something unique about these bodies. During a dig, they uncovered some of the monoliths and were surprised to see that they were covered in ancient carved tattoos, unlike any they had seen before.

Some time ago, many of the statues were uncovered by archaeologists and moved to stone platforms called Ahu, surrounding the island’s perimeter. Despite this, many still believe that the statues themselves are merely heads, a common misconception. The statues were carved out of rock faces by the ancient Polynesian Rapa Nui people between the years 1250 and 1500 CE. An astonishing 887 statues were created in total. The heaviest to be unearthed to date is a short, wide statue, weighing 87 tons and the tallest, known as Paro, is nearly 10 metres high (33ft) and weighs 82 tons! A gigantic, unfinished statue was also found. If this statue was finished it would have measured 21 metres (69ft) tall and weigh in at a whopping 270 tons! It is widely thought by archaeologists, that the statues were buried by nature and not deliberately by human hand as most perceive. The Rapa Nui were experts in maneuvering these hefty sculptures. Upon each one, there are visible post holes and rope guides which were cleverly used in a rope pull technique to transport and mount them once they were carved, onto rock bases. Now archaeologists are working hard to decipher the ancient tattoos, which academics say represent the canoes of the Polynesians who made them. It’s another fascinating discovery to add to the list of the mysterious culture of one of the most remote inhabited places on Earth.

“There exists in the midst of the great ocean, in a region where nobody goes, a mysterious and isolated island. The island is planted with monstrous great statues, the work of I don’t know what race, today degenerate or vanished; its great remains an enigma.”