Bhutan is one of the most unique countries in the world. The name of the country is Druk Yul, which translates to Land of the Thunder Dragon.

Why the name? Well, it is all because of the weather. There are many violent and large thunderstorms that whip down through the valleys from the Himalayas.

The country is known for its natural beauty, forest conservation, and biodiversity. Bhutan covers 72% forest area, making it one of the largest biodiversity places in the world.

The country has a monarch. King Jigme Khesar Namgyel Wangchuck, a dearly loved figure in Bhutan, relinquished his absolute powers and turned Bhutan into a constitutional monarchy as soon as he was formally made the king.

Under the Wangchuck dynasty, Bhutan has been largely cut off from the rest of the world and unlike other countries measures its prosperity based on Gross Happiness Index and not Gross Domestic Productivity. 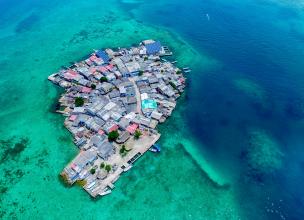 Travel
Santa Cruz del Islote – Most Densely Populated Island in the World
According to legends, the island was uninhabited some 150 years ago. The size was less than a hectare of land. It floate...
Ushguli – The Highest Inhabited Place in Europe
Ushguli is a community of four villages located at the head of the Enguri gorge in Svaneti. It is recognized by UNESCO W...
Just Enough Room – Fitting Name for the World’s Smallest Inhabited Island
The island lies on the Saint Lawrence River between Heart Island and Imperial Isle, close to the US Border with Canada. ...
Lombard Street in San Francisco – A Crooked Delight
Lombard is one of the most famous streets in the world. Every year, more than 2 million people come to visit, and take p...