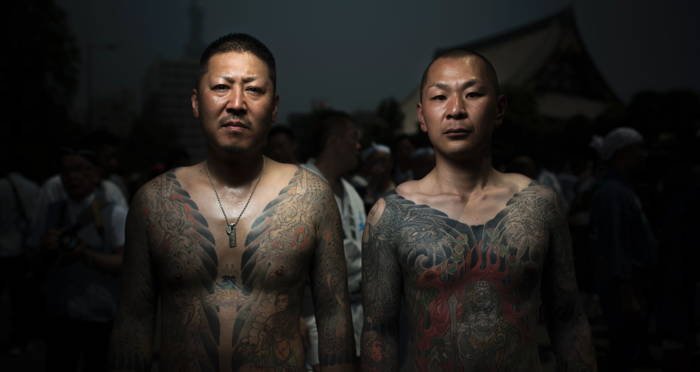 Yakuza, or gokudo, translating to “the extreme path”, are members of transnational organized crime syndicates originating in Japan. Japanese police calls them the “violent groups””, while the Yakuza calls themselves “the chivalrous organizations”

Yakuza, or gokudo, translating to “the extreme path”, are members of transnational organized crime syndicates originating in Japan. Japanese police calls them the “violent groups””, while the Yakuza calls themselves “the chivalrous organizations”. With that in mind, the term Yakuza means gangster, and they are involved in mafia-like criminal organizations.

Notorious for their strict codes of conduct, organized fiefdom nature, and unconventional ritual practices. Yakuza members are only males, and they have tattooed bodies and slicked hair.

When they were at their height, Yakuza maintained a large presence in the media and operated internationally. As of 2016, their number has went down. Estimates are that in 22 gangs, there are close to 30,000 members.

However, they are still active in Japan, and engage in array of individual activities. There is no strict prohibition on Yakuza membership in Japan today. But there is much legislation that has been passed by the Japanese government aimed at increasing liability for criminal activities.

Origin of the Yakuza

There is no definitive and single origin of Yakuza organizations. However, there are two modern explanations. One is that they emerged in the mid-Edo period, and they primarily peddled illicit, stolen, or shoddy goods. And the other that was involved and participated in gambling. The first one were called tekiya, while the latter were called bakuto.

During the Edo period, tekiya, or peddlers, were considered one of the lowest social groups. However, as they took over administrative duties, they began their rise. Highly structured, and with a hierarchy that resembles a family, there was a surrogate father, and surrogate children.

Bakuto, or gamblers, had a much lower social standing even than traders. Gambling was illegal, but gambling houses cropped up in abandoned temples or shrines in small villages and towns all over Japan.

Women of the Yakuza world

There is an unwritten rule that women cannot be part of the Yakuza. However, there is a notoriously closed subculture of women associated with Yakuza. And thanks to photographer Chloe Jafe, we get a close look at them.

Women could fill only a limited number of roles. For the most part, women are wives or mistresses. Some women even divorce their husbands to be in the organization. Women married to men in the top ranks of the organization have their own personal female bodyguard.

Despite all of that, women do not have real power within the gang. Yakuza wives remain outside the sphere of criminal activity, and they remain in the passive emotionally and financially supportive role.

In most cases, women do not have previous connection to the underground world. Simply put, they fell in love with a man that happened to be a gangster. Within the organization, women unite in their unreserved commitment to the Yakuza. And because of their husband’s occupation, they usually live in a closed community. Wives have to live a secret life, so they stay together between them. Women within the Yakuza are rarely connected to other women outside their circle.

Yakuza members and gangs are known for their rituals. Their signature ritual is Yubitsume. This is a process of cutting off of one’s finger. It is a form of penance or apology, upon a first offense, the transgressor must cut off the tip of his left little finger and give the severed portion to his boss. However, in the past few years, this practice has stopped, due to being an easy identifier for the police.

The origin of the ritual comes from holding a Japanese sword. New members must show how hard is their grip of the sword. The bottom three fingers of each hand are used to grip the sword tightly. In the same time, the index finger and the thumb are slightly loose. The idea is that if you have a weak sword grip, you have to rely on the group for protection, which reduces individual action.

In the past few years, prosthetic fingertips have been developed to disguise the distinctive appearance.

Another important aspect of the Yakuza are tattoos. Many members have full-body tattoos, include the genitalia. Tattoos are known as “irezumi”, and the procedure involves inserting ink beneath the skin. Professionals use non-electrical, hand-made and handheld tools with needles to apply the tattoo. As you can assume, the procedure is expensive, painful, and sometimes takes years to complete.

When Yakuza members play cards with each other, they remove their shirt to display their full-body tattoos to each other. This is one of the few times they show the art, because they keep it covered in public so they cannot be recognized. That is why they wear long-sleeve and high-neck shirts.

On the morning of 22 March 2016, three coordinated suicide bombings occurred in Belgium. Two of them came at the Brussels airport in Zaventem, and one at the Maalbeek metro s...

Conspiracy
Jimmy Hoffa – All the Death Conspiracies
Jimmy Hoffa is one of the central figures in the Irishman, a fictional movie trying to explain the disappearance of the ...
Top 5 Infamous Criminals that will be Roomies with El Chapo in Supermax
El Chapo asked to be moved to a new facility, and he is now spending his time in the Supermax prison in Colorado
Alvin Karpis – Longest Serving Alcatraz Prisoner
Alvin served 26 years in Alcatraz, and was released on a parole in 1969
Meet Robert John Maudsley, the Real Hannibal Lecter
Robert was a British serial killer, responsible for murders of four people. He committed three of these murders in priso...