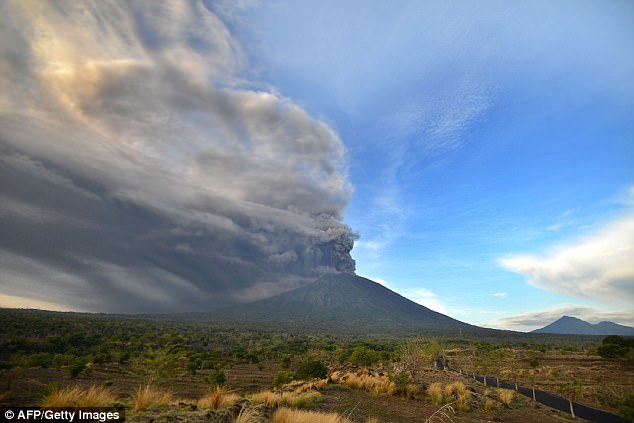 The November 2017 eruption came more than 50 years since the last eruption of the volcano. Back then, the authorities were not as prepared

In late October 2017, the activity decreased significantly, leading to lowering of the highest status of emergency. However, in November, things went back to highest alert. A magmatic eruption began early on Saturday, November 25. The resulted eruption plume was reported to rise about 1.5-4km above the summit crater, drifting towards the south. Flights bound for Australia and New Zealand were canceled.

The November 2017 eruption came more than 50 years since the last eruption of the volcano. Back then, the authorities were not as prepared.

The last time the volcano erupted, it was in 1963. That was one of the largest and most devastating eruptions in Indonesia’s history. The eruption started on February 18, 1963. Local residents heard loud explosions and saw clouds rising from the crater of Mount Agung. On February 24, lava began flowing down the northern slope of the mountain, traveling up to 7km in the next 20 days. On March 17, the volcano erupted, sending debris 8 to 10km into the air and generating massive pyroclastic flows. Between 1,000 and 1,500 people died in 1963 at the hands of the eruption. Numerous villages were destroyed in the process. Another eruption on May 16, led to death of more than 200 people. The minor eruptions and flows lasted for more than a year. Pyroclastic flows, a fast moving mix of gas and volcanic material, spread 13km from the crater in 1963. Because of all that, villages were incinerated. The silver lining in 1963 was the survival of the Mother Temple of Besakih. The lava flows missed by mere yards the temple. Saving of the temple is regarded as miraculous and a signal from the gods that they wished to demonstrate their power, but not destroy the monument that the Balinese people built.

The temple is the most important, largest, and holiest temple of Hindu religion in Bali. Perched nearly 1000 meters up the side of Gunung, Agung, the temple is a complex of 23 separate but related temples. The largest and most important one is the Pura Penataran Agung.

The temple was nominated for World Heritage Site in 1995, but remains unvested. There are more than 70 festivals held at the complex every year. Every shrine celebrates a yearly anniversary.

48:00
Environmental
New
Secret Brazil: Jaguar, the king of the Pantanal

Pantanal is the largest wetland on the planet, located in the heart of Brazil. Located in the South of the Amazon Basin, this nature heaven spreads across the borders of Paraguay a...

History
7 Egyptian Secrets that Will Surprise You
As one of the earliest civilizations in the history, Egyptians contributed so much to humanity. They had numerous discov...
Ayutthaya – A Historical Landmark Worth a Visit
The historic city flourished from the 14th to the 18th century. During that time, it grew to one of the largest and most...
Night of Broken Glass – The Beginning of the Holocaust
More than 7,000 Jewish businesses were destroyed, and 30,000 Jews were arrested and sent to concentration camps
Worst Earthquake Disasters in History
So far in history, there have been a couple of earthquakes that left cities in ruins behind them