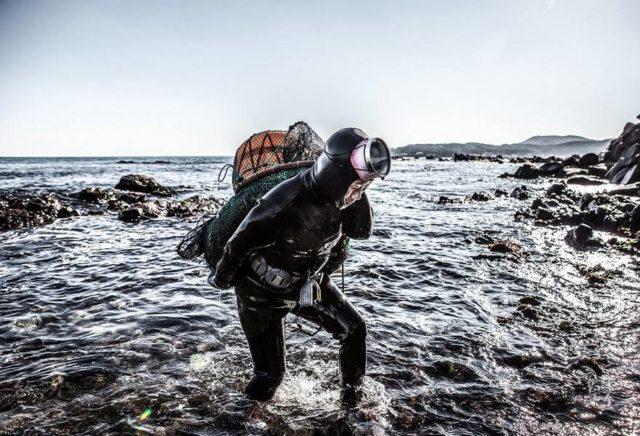 Young girls begin their training at 11 years old. They start in shallow water, and work their way up to more challenging depths from there. It takes about 7 years of training for a girl to become a full-fledged haenyeo. Currently, the oldest woman is 80 years old, and she has been doing this for more than 66 years

Jeju Island in South Korea is known for its volcanic landscape of craters and beach resorts. But there is one tradition that makes the island one of the most beautiful and famous destinations in the country. And that is the tradition of Haenyeo, also known as real-life mermaids.

The sea women are elderly women, usually in their 70s and 80s, living on the island and diving up to 30 feet under water to catch shellfish. This tradition started even before diving equipment was available. It is much harder than a classic scuba dive.

Beginnings of a tradition

The diving tradition at Jeju Island began in 434 AD. Back then, it was considered a male profession, and it was exclusive for male divers. The only exception were women who worked alongside their husbands.

It isn’t until 17th century that there is a mention of female divers in literature. By the 18th century, female divers outnumbered male divers, and at this point, they got their name “haenyeo”.

The reason for rise in female divers is simple. In the 17th century, a significant number of men died due to war and deep-sea fishing accidents. 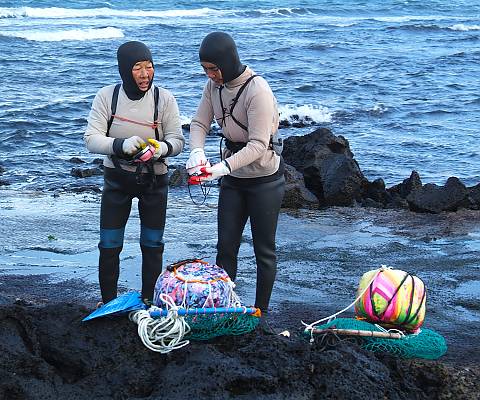 When the Japanese colonized Korea in 1910, diving became much more lucrative. And the trend of female divers was even more prominent. It was during the Japan colonization period when haenyeo were allowed to sell their catch at market and make profit. Before that, the women gave what was harvested to the Choson government as tribute. In addition, Japanese merchants started hiring the real-life mermaids to work for them in Japan and on the Korean mainland.

The road to haenyeo

Young girls begin their training at 11 years old. They start in shallow water, and work their way up to more challenging depths from there. It takes about 7 years of training for a girl to become a full-fledged haenyeo. Currently, the oldest woman is 80 years old, and she has been doing this for more than 66 years.

Their gear includes wetsuit, googles, gloves, chest weights that assist diving, an L-shaped weeding hoe, and a net attached to a flotation device. The girls stash their catch in the nets until they are finished with the diving for the day. 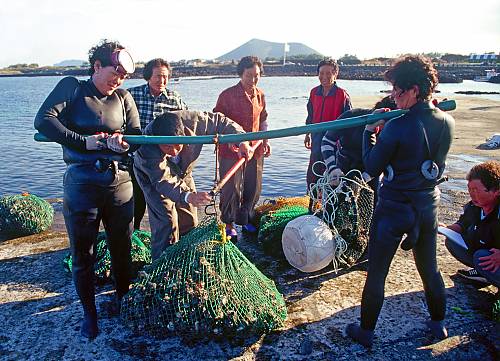 Haenyeo women are categorized into three groups, and it depends on their experience. The “Hagun” are beginners, “Junggun” are intermediate divers, and “Sanggun” are experts that offer guidance to the other groups.

How long do they stay in the water?

How long a haenyeo stays in the water for the day depend on the season. Nowadays, their gear is more technologically advanced. Back when there were no wetsuits, the women wore cotton swimsuits. They could not spend more than one hour in the water during the winter months. After one hour in the water, the girls would come up at the shore and sat by fire for 4 hours to dry off. They could jump back into the water after the break for another hour.

With each dive, they plunge up to 30 meters deep and can hold their breath for more than three minutes.

Before a dive, the sea women say prayers to Jamsugut, the goddess of the sea. They ask her for safety and an abundant catch. The government has asked UNESKO to add the profession to the Cultural Heritage list, but that hasn’t stopped the trend of decline.

According to officials from the Jeju government, in 20 years, the tradition of real-life mermaids might be gone unless they have new recruits.

Science
How to Detoxify the Pineal Gland
The pineal gland is believed to play a vital role in consciousness. Detoxifying it can be helpful in attaining higher le...
The Karo Tribe – Maintaining a 500-year old Body Paint Tradition
The Karo are a Nilotic ethnic group. They are one of the smallest tribes in the region with an estimated population betw...
Gulag – Economy and Political Labor Camps Keeping Staling in Power
Stalin built these camps between 1931 and 1933. The first massive construction project was the White Sea-Baltic Sea Cana...
The Rigorous Process of Becoming a Wax Figure in Madame Tussauds
From the initial sitting to the launch of the wax figure it takes up to four months. The process requires more than 20 s...