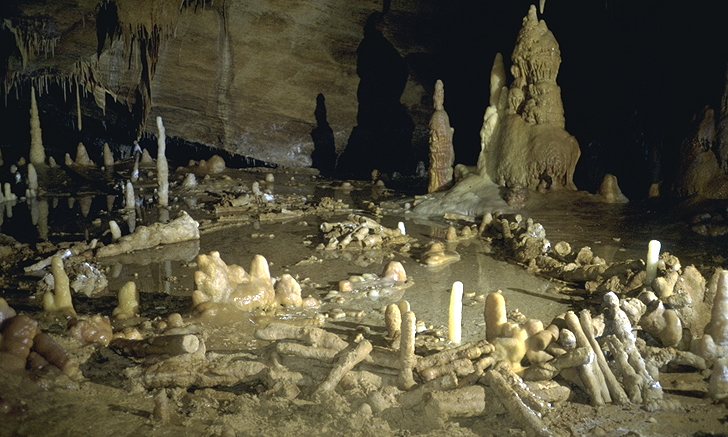 The deep cave is the latest evidence for early human construction, a living area for Neanderthals, the Eurasia population before the modern humans

In 1990, local cavers in France found the Bruniquel cave and believed to be some 50,000 years old. But new tests show that the cave, located in southwest France is actually more than tens of thousands of years old.

The deep cave is the latest evidence for early human construction, a living area for Neanderthals, the Eurasia population before the modern humans. In 2013, a team of researchers led by Jacques Jaubert from the University of Bordy got down into the cave and studied the structures. They took 18 samples, and with a variety of techniques, the team managed to place the cave in the timeframe of 176,500 years old, give or take 2,100 years.

Inside the cave, researchers found series of ring-like structures, smaller piles and semi-circles, all built from pieces of stalagmite. The structures are located 1,102 feet (or 336 meters) deep from the entrance.

All structures are made out of stalagmite that is the same size. The constructions are made by stacking stalagmite on top of each other. In some cases, the walls support the structures from toppling.

The construction is made from roughly 400 pieces of stalagmite, with the two ringed walls being the most prominent formation. The largest wall is seven meters (22 feet) across, and if it were to be placed intact, it would stand up to 40cm high.

The Mystery of the Stones

The mysterious stone structures rise from cave floors, and they are hewn to the same length. Some are aligned in large circular structures, like the largest 22 feet across, while others were aligned in smaller semi-circles. The rest of the stalagmite pieces were stacked in heaps.

here is visible black discoloration on the stalagmites, suggesting that fire has been lit atop the structures. There is also a burnt bone of a bear, found in the smaller circle. The intriguing aspect is that while the scene looks like it was done by modern humans, the uranium dating of the stalagmites shows that the scene is actually done much earlier than the period modern humans populated Europe.Rediscovered beauty

The cave in Bruniquel was discovered previously, but experts believed to be just 50,000 years old. According to local experts and cavers in France, the stalagmite structures were 50,000 years old, the same age as the burnt animal remains that they found nearby.

However, new and fresh tests on the structures revealed that the walls of the cave were older than it was previously reported. Stalagmite pieces dated back to a period 175,000 years ago. Researchers from Belgium and France argued that only Neanderthals could have built the structures inside, and no claw marks, paw prints or any other “bear tool” could stack stalagmites so high in the wall.

The Significance for Neanderthals Behavior

According to estimates, some 40,000 to 400,000 years ago, Neanderthals lived in Eurasia and died the moment the “modern humans” arrived in the region and occupied it. Often overlooked, the Neanderthal was actually very capable and skilled human being, and the cave found in France is just the latest example.

They lived in shelters, harnessed fire, wore clothes, and even mastered the art of stone tool making. But buildings were never their strong sides. They were the only living human population in Europe during the period, and what the structure found in the cave is far from clear.

However, one thing is certain, Neanderthals were strong and capable builders. While it is not certain what the walls were made for, it is intriguing that Neanderthals were actually able to go so deep inside the cave and work. There was no natural light inside, leaving them in total darkness. One question that anthropologists will try to answer in the following months and years is whether Neanderthals built the walls when they found they were inside the cave by chance, or were they trying to make underground structures? But it is clear that there is not high jump in terms of skills, capacities and abilities between the Neanderthals and the “modern humans”.

The Bruniquel cave also offers solid evidence that the Neanderthals mastered the art of subterranean living. Many paleoanthropologists suggest that to build the structures, Neanderthals needed solid source of illumination, social organization, mobilization of people, leaders, advisers, manufacture, ability to construct and conceive patterns, and much more.